Brazil drew 0-0 with Mexico in their FIFA World Cup 2014 Group A match.

Brazil‘s President Dilma Rousseff encouraged the national football team on Wednesday, a day after its disappointing 0-0 tie with Mexico in the FIFA World Cup 2014. Brazil could not break Mexico’s defence in an entertaining match in Group A at Fortaleza.

“To win sometimes you have to go through a 0-0,” Rousseff said of the surprising outcome of the game between the hosts of the FIFA World Cup 2014 and Mexico, as part of the group phase competitions, reports Xinhua.

In a quick exchange with reporters at the presidential palace, Rousseff said she was confident that Brazil will bounce back to beat Cameroon on Monday at the Mane Garrincha Stadium in the capital Brasilia, and qualify for the Round of 16s.

“I’m sure we are going to win. Sometimes we have to experience some trouble,” the president said.

Rousseff attended the second half of the Mexico-Brazil match, accompanied by Brazilian Air Force (FAB) cadets.

She will not, however, be attending Monday’s match, travelling instead to Macapa, in northern Amapa state, where she is set to deliver housing to low-income families.

Prior to the start of the FIFA World Cup 2014, Rousseff sent a letter of encouragement to the national team, affirming that the world knows Brazil’s footballers are the best, and that they have a “disconcerting ability for improvisation” on the field. 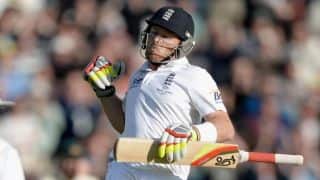