The Portuguese winger's knee injury could end his career.

Cristiano Ronaldo’s world cup dreams may have come to a premature and a very sad end as reports are floating around the internet suggesting the Portuguese football star’s knee injury has again flared up, and if he further plays in the FIFA World Cup 2014, it could even mean the end of his footballing career. He was wearing an ice pack on his injured knee during a Portugal training session as well.

Rumours: Cristiano Ronaldo is out of the World Cup. Hope its not true. #GetWellSoonRonaldo pic.twitter.com/FcUbu0oVAR

Newspaper El Confidanciel claims that Ronaldo had suppressed the injury which didn’t resurface since the UEFA Champions League final win, but if he further suppresses it, it could endanger his career.

If reports are to be believed, then doctors have asked him to not play for about two months and give his knee complete rest. Dr. Noronha, a trusted doctor of Ronaldo’s agent Jorge Mendes and a specialist in knee injuries, has apparently said, “If Ronaldo does not stop and rest, his future is in danger.” 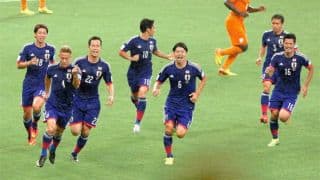