FIFA rules call for a ban of at least two matches up to a maximum of 24 months.

Uruguay’s Luis Suarez has been officially charged by FIFA for biting Italy defender Giorgio Chiellini in the teams’ World Cup match. If found guilty, Suarez could face a suspension. FIFA initiated action soon after the match on Tuesday.

\FIFA rules call for a ban of at least two matches up to a maximum of 24 months. FIFA asked the team to present evidence, which can include video recordings, by 2000 GMT on Wednesday. A decision must be published before Saturday, when Uruguay plays Colombia in a round-of-16 match at Maracana stadium., reported The Associated Press.

Uruguay beat Italy 1-0 to progress to the Round of 16. Suarez clashed with Chiellini and was seen biting the shoulder of the Italian defender. Match referee Marco Rodriguez of Mexico did not notice the incident and didn’t take any action.

Suarez was suspended in the Netherlands and England as well for similar incidents. Suarez didn’t deny biting the defender and said he was angry that the Italian defender had hit him in the eye during the game.

FIFA’s disciplinary panel “is responsible for sanctioning serious infringements which have escaped the match officials’ attention,” the governing body said in a statement. “Any type of proof may be produced,” FIFA noted, including “reports from referees, declarations from the parties and witnesses, material evidence, audio or video recordings.” 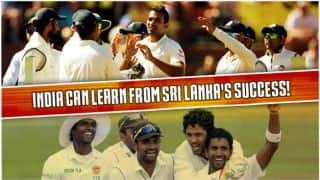