The German coach has said there is no place for reputation in the German team.

Things have changed in Germany‘s “Nationalmannschaft”(national team). Some say the changes made are dramatic. Prior to their opening Group G match against Cristiano Ronaldo’s Portugal (CR7) Monday, less and less seems like it was in bygone days.

German coach Joachim Loew has not only installed new tactics and radically changed their style — less open — but he is also emphasising the fact that some of his stars may well have to stay patient “lying on ambush” on the substitutes’ bench, reports Xinhua. Stars like Bastian Schweinsteiger, Mario Goetze (both Bayern Munich) or Andre Schuerrle (Chelsea) and even Miroslav Klose (Lazio Rom), the only recognised striker, might be effected by Loew’s new rotation policy and feel the pain of being left out.

“To make it clear, we have 23 highly skilled squad members. Ok, put another way, we’ve got a starting 14. But what counts is that we need them on high alert at all times. They have to be ready for action every minute and every second,” Loew said. “Luckily enough we’ll have some possibilities during the game and it’s vital if we are to win matches at the World Cup in Brazil,” pointed out the head coach. “If matches are all-square, the players have to come on, make all the difference and turn the game around. Call them “Special-Forces”.

Loew additionally has dealt with flood of injuries to his players that have disrupted his preparations, “You don’t win the World Cup with your starting eleven.” Loew has said that he finds “it difficult to understand the discussions going on about tactics and the false nine.”

In today’s football you need to be flexible. But there is a whole lot more on Loew’s mind. Playing in Brazil and playing such a brilliant counter-attacking side like Portugal, the 53-year-old German wants to have a greater control of the game. Loew abandoned the care-free offensive style after the disastrous Euro 2012 defeat in the semifinal against Italy after recognising that he had chosen the wrong tactics. Germany’s play in Brazil is therefore expected to be less artistic but more effective and hard-nosed.

Against Portugal, he will start with four specialist central defenders. “For any goalie that’s a dream,” said former world-class keeper Oliver Kahn. Loew’s move helps to shut all the doors at the back. After conceding ten goals, the Germans had the worst statistics of all the group winners in qualifying. It has forced Loew to rethink his defensive strategy. In front of keeper Manuel Neuer will be Jerome Boateng (Bayern Munich), Per Mertesacker (Arsenal), Mats Hummels (Borussia Dortmund) and Benedikt Hoewedes (Schalke 04). Boateng will focus on Ronaldo but has already asked for help, “I can’t stop him alone.”

Now a defensive midfielder, the German captain Philipp Lahm (Bayern) will operate in front of the back four. This means Lahm’s job is exactly the same as the one at his club Bayern Munich where Bayern coach Pep Guardiola got him patrol the same area. Slightly ahead of Lahm, Sami Khedira (Real Madrid) is expected (or Schweinsteiger) to partner Toni Kroos.

“Bastian Schweinsteiger is ready for action,” Loew said after the Munich midfielder had to undergo a medical checkup at a nearby hospital. The attacking department will be made up of Thomas Mueller (Bayern) and Lukas Podolski (Arsenal) with maybe Mesut Ozil just behind in the middle. Lazio striker Klose will in all probability come on as a substitute at some stage of the game. Mueller and Podolski have the order to keep swapping positions and stay out on the flanks. If Mueller moves in as center forward, Schuerrle could be on the left wing and Oezil would be on the bench.

Despite Loew’s clear orders, some experts are interested to see just how solid the peace inside the German squad is, especially when star-players are left out. Players recently described the team-spirit as “pretty good” to “all right”. Players like Lukas Podolski and Per Mertesacker have said they are positive about the camaraderie within the team but “we have to see how things develop. Meaning — a good result against Portugal could back Loew’s “rotation strategy”. 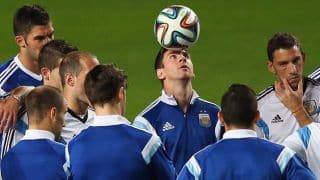