Suarez was previously banned for biting Branislav Ivanovic in the English Premier League.

Luis Suarez, Uruguay‘s key striker has again found himself in trouble after appearing to have bitten the Italian defender, Giorgio Chiellini in the Penalty area during a FIFA World Cup 2014 game. There were numerous Twitter reactions to what was an ugly incident.

If You Cant Beat Them Then Eat Them #BanSuarez #FifaWorldCup

Uruguay advances by the skin of their teeth! #WorldCup #BanSuarez

In the past too the Uruguay and Liverpool striker has found himself in trouble. In the year 2013, he was banned for  biting Branislav Ivanovic in English Premier League (EPL). It has to be remembered that FIFA can saction a ban on a football player for two years. Luis Saurez though, has found support from Uruguay coach, Oscar Tabarez 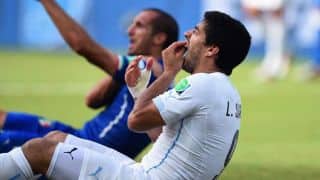