Suarez had words of support for his Liverpool captain Steven Gerrard.

Luis Suarez has hit out at critics after his match-winning performance in Uruguay‘s 2-1 victory over England.

Playing his first match since undergoing knee surgery last month, the Liverpool striker scored either side of halftime at Sao Paulo’s Itaqerao stadium to all but end England’s World Cup campaign, reports Xinhua.

“Before the game too many people in England laughed about my attitude over the last few years,” he said.

“This is a very good time for me. I want to see what they think now. It has been like a dream. It is something I have dreamt about very often. It was one of the best games I’ve played. It’s an amazing moment for me.”

Suarez has drawn criticism for his disciplinary record since joining Liverpool from Ajax in 2011.

He was banned for eight matches for racially abusing Manchester United’s Patrice Evra in 2011 and last year received a 10-game suspension for biting Chelsea’s Branislav Ivanovic.

For Suarez, redemption came when he struck his team’s winner five minutes from time after Wayne Rooney’s equaliser.

“Maybe a few days ago I thought this wouldn’t be possible,” said the 27-year-old, who only resumed full training with his teammates this week.

“I had to keep calm, keep my cool and when I got the ball I just kicked it with my whole heart thinking of all those who have supported me.”

Suarez had words of support for his Liverpool captain Steven Gerrard, who cut a forlorn figure after the match.

“I told him to keep going. He’s the best player I’ve played with,” the forward said.

England need Italy to defeat Costa Rica in Recife on Friday to remain alive in the tournament. 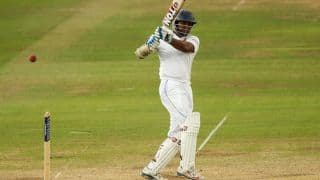