Iyer struck a glorious 148 but his effort was not enough to see India B through as India C beat them by 29 runs.

Shreyas Iyer struck a glorious 148 but his effort was not enough to see India B through as India C beat them by 29 runs in a high-scoring final to win the 2018-19 Deodhar Trophy. India C were led by centuries from skipper Ajinkya Rahane and Ishan Kishan, who led the team to an imposing 352 for 7. In reply, Iyer replied with a century of his own, but lack of a sizeable contribution from the middle order saw India B fall short of the target.

Opener Ruturaj Gaikwad scored 60 off 56 balls with seven boundaries and a six, but India B were dented by failures of Mayank Agarwal, Hanuma Vihari and Manoj Tiwary. From 16 for 1, Iyer and Gaikwad put on 116 runs for the second wicket before the captain began running out of partners. At Tiwari s dismissal at 172 for 4, Ankush Bains partnered Iyer for 65 runs but that was the last stable partnership they had.

Deepak Chahar contributed with 21 but the pressure of a challenging asking rate mounted. Iyer finally departed two short of 150 off Rahul Chahar having struck 11 fours and eight sixes. Pappu Roy, despite conceding 75 in his 10 overs, picked up three wickets including that of Vihari and Bains. Navdeep Saini was the pick of the bowlers picking up 2 for 47. Rajneesh Gurbani and Navdeep Saini picked up two each as well.

After opting to bat, Rahane and Kishan combined for a stand of 210 runs for the opening wicket in just 30.3 overs with Jharkhand s wicket-keeper batsman Kishan playing the aggressor s role. He got to his 100 off just 76 balls before falling to Jaydev Unadkat, finishing with 3 for 52. Kishan hit 11 boundaries and six sixes during his 87-ball 114-run knock.

Rahane carried his bat through remaining unbeaten on 144 off 156 deliveries with the help of nine fours and three sixes. Suryakumar Yadav powered his way to 39 off just 18 balls with the help of four sixes and one four. Shubman Gill added 26. India C could have taken target close to the 400-run mark had it not been for a batting collapse in the death overs that saw the team lose four wickets for just 17 runs. 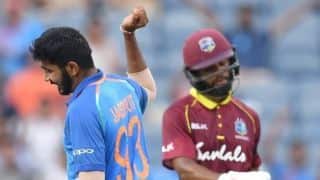