With only a handful of one-day internationals remaining for either side between now and May 30, the final leg of preparations begins.

It was at the Sydney Cricket Ground where India basked in the euphoria of their maiden series Test win in Australia. Five days removed that historic day, India and Australia will square off at the same venue once more in a series of equal magnitude if not more. 2019 is the year of the World Cup, and with only a handful of one-day internationals remaining for either side between now and May 30, the final leg of preparations begins.

Both teams find themselves at the opposite end of the spectrum. India have been formidable in ODIs, having won the Asia Cup in September, followed by a 3-1 victory over the West Indies at home. Australia, their opponents meanwhile had a forgettable 2018, where they lost three straight bilateral series which included a losing streak of seven matches. Last year, they won just three of the 24 matches they featured in and have plenty to worry.

They are without the pace trio of Mitchell Starc, Pat Cummins and Josh Hazlewood and in their absence, the responsibility falls on the shoulders of Peter Siddle and Jason Behrendorff one playing his first ODI after nine years and the other making his debut. The third seamer, Jhye Richardson has played just four ODIs which leaves Jason Behrendorff the most reliable of the three.

Batting is contrasting too. While India’s top three Rohit Sharma, Shikhar Dhawan and Virat Kohli have fired frequently, Australia have struggled in that regard. Aaron Finch has a new opening partner at the top, the Adelaide Strikers wicketkeeper Alex Carey, but having opened just twice in T20 cricket carries a question mark over his role as an opener. Usman Khawaja has been pushed a slot down to No.3, followed by Peter Handscomb, Shaun Marsh and Glenn Maxwell.

Due to the controversy two players of the Indian team have embroiled themselves in, Kohli held back on announcing the Playing XI, as the norm is. That said, he was not fretting over it much as it gives India to re-think their team combinations and in turn, explore further options. On the eve of the match, Kohli and Finch posed with the Gillette Cup, and shortly after, with the trophy the two teams will fight to lift in England.

Weather: Partly overcast with a high of 29 degree

With suspensions looming on Hardik Pandya and KL Rahul for their inappropriate comments made during a TV show, India might have to go in for a forced change, with Ravindra Jadeja filling the allrounder’s role. Kohli stressed on how effective Jadeja was during the home series against the West Indies and while he does not give India the option of an additional seamer, his finger spin, as evident during the Test, could prove a crucial factor in Sydney. MS Dhoni returns to keep wickets after being left out of the T20s, and the other keeper Dinesh Karthik is likely to receive stiff competition from Kedar Jadhav for a spot. With Jadeja getting a place, either Kuldeep Yadav or Yuzvendra Chahal will be benched, but based on current form, the chinaman might just get the nod ahead of the legspinner. As for pacers, in the absence of Jasprit Bumrah, Bhuvneshwar Kumar is a shoe-in with Khaleel Ahmed and Mohammed Shami being his partners.

Mitchell Marsh was ruled out due to gastritis, but his cover Ashton Turner failed to find a place in the 11, despite being in fabulous form for the Perth Scorchers. Nathan Lyon comes in while Adam Zampa misses out. Behrendorff impressed against India in the T20s in 2017 and is in line for his maiden ODI game.

– Bhuvneshwar is one strike away from 100 ODI wickets

– India were beaten 1-4 in the last bilateral series in Australia, but their only win came at the SCG where they gunned down 331 runs. For Australia, Mitchell Marsh and David Warner had scored centuries, while Manish Pandey s unbeaten 104 had gotten them home. Strangely, all three players will not be playing Saturday.

“We’ve been wanting to figure out who apart from Bhuvi and Bumrah are the two or three guys we can bank on. And these games will provide an opportunity for those guys to firstly present their case strongly and secondly gain confidence from playing these games.” – India captain Kohli on India’s pace bowling stock.

“Over the last 12 months Virat s averaged 133, Shikhar 75, and Rohit 50; so there s a lot of runs and balls faced from their top three. It s important to get them as early as you can because once they get in, they score fast and they don t seem to get out too easily.” – Finch‘s focus is on dismissing India’s top three cheaply. 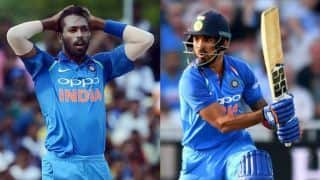 Hardik Pandya, KL Rahul out from 1st ODI vs Australia 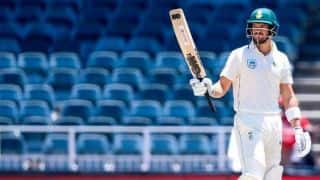