In Sylhet's debut Test, Zimbabwe crushed Bangladesh by 151 runs to record their first Test win in five years on Tuesday.

In Sylhet’s debut Test, Zimbabwe crushed Bangladesh by 151 runs to record their first Test win in five years on Tuesday. Chasing 321, Bangladesh were bowled out for 169 on Day 4 of the first Test at Sylhet International Cricket Stadium.

Resuming one their overnight total of 26/0, Bangladesh began steadily with the openers taking them to 56/0 before capitulating to the spinners. It was Sikander Raza who triggered a slide with the first breakthrough for his team when he pinned Liton Das on 23.

Kyle Jarvis then bowled one outside off and Mominul Haque (9) poked at it and ended up dragging it back onto the stumps. Imrul Kayes had looked good in his 43 which was studded with six fours but his failed attempt for a paddle sweep off Raza resulted in his leg-stump being flattened.

Raza then picked up his third wicket in captain Mahmudullah and debutant spinner Brandon Mavuta remvoed Nazmul Hossain Shanto at the stroke of lunch to leave Bangladesh innings in tatters at 111/5 in 46.5 overs.

The hosts lost their final five wickets in even quicker time, inside 17 overs with Mavuta running through their middle-order. He finished with figures of 4/21 from his 10 overs and only Ariful Haque offered some resistance, scoring 38 off 37 before becoming the final wicket to fall as Zimbabwe recorded just their third victory away from home and first such in 17 years.

With this win, the visitors have taken a 1-0 lead in the two-Test series. 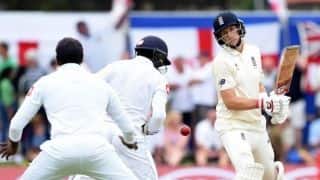