Attacking half-centuries from allrounders Shivam Dube and Axar Patel helped India A to 327/6.

Attacking half-centuries from allrounders Shivam Dube and Axar Patel powered India A to 327/6 against South Africa A in the first unofficial ODI of the five-match series in Thiruvananthapuram on Thursday.

Put into bat at the Greenfield International Stadium in a rain-curtailed fixture, Dube hit an unbeaten 79 off 60 while Axar struck a quickfire 36-ball 60* in an unbroken 121-run stand for the seventh wicket.

The contest was reduced to 47 overs-per-side due to wet outfield and India A were off to a solid start with the opening pair of Ruturaj Gaikwad and Shubman Gill adding 54 runs. Beuran Hendricks (2/89) broke the opening stand when he had Gaikwad caught on 10 in the ninth over.

India A batsmen got the start but failed to convert. Gill made 46, Anmolpreet made run-a-ball 29 and captain Manish Pandey 29 as the hosts were reduced to 169/5 in 27.1 overs.

When Krunal Pandya (14) was dismissed India A were 206/6. His departure brought together the pair of Dube and Axar as they began punishing the tourists, finding boundaries with ease.

Dube was the first to his half-century reaching there in 46 deliveries. Axar then shifted gears and was particularly brutal against Hendricks whom he hit for two fours and a six in a single over. With the innings coming to its end, the pair kept their hunt for boundaries Dube blasting two sixes off successive Junior Dala deliveries in the 45th over from which came 19 runs.

Axar completed his fifty off 34 deliveries. The final over turned out to be the best of the India A innings from which they looted 23 runs. 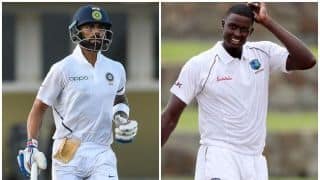 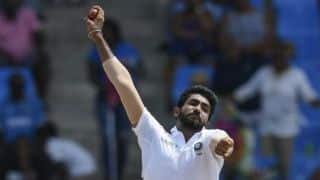