England play ODIs against Pakistan in May before the World Cup, and Archer may be included.

The eligibility of Barbados-born allrounder Jofra Archer to play for England has put the likes of Liam Plunkett, David Willey and Tom Curran at risk ahead of the 2019 ICC Cricket World Cup, feels Nasser Hussain.

Archer, who has enhanced his reputation by playing T20 franchise cricket in England, Australia and India, has been earmarked to make England’s ODI squad for some time now. With IPL form to his credit for Rajasthan Royals, Hussain believes the youngster could bolt into the setup before the April 23 deadline to submit final teams for this summer’s showpiece event.

So far this IPL season, Archer has taken seven wickets in seven games with an economy of 7.22 and scored 39 runs in three innings at a strike-rate of 156.

England play ODIs against Pakistan in May before the World Cup, and the former skipper turned TV analyst backed Archer to be included.

“Usually before a World Cup England are trying to work out which players to pick, for once they are almost scratching their heads about which players to leave out,” Hussain told Sky Sports News. “This lad (Archer) is a very special talent. He has mainly done it in Twenty20 but he has been around franchise cricket and he is definitely a three-dimensional cricketer. (READ: Inspired by Ronaldo and LeBron, Liam Plunkett chases World Cup spot)

“I think they will pick him – it would be odd to leave him out – and what they would want to do is play him against Pakistan. He gets into the preliminary squad for me, but this squad can be changed until up to a week before the World Cup and not just because of any injuries.”

Archer’s emergence, feels Hussain, will put the trio of Plunkett, Willey and Curran on notice.

“The guys who would be concerned are maybe Willey, who hasn’t played too much recently but gives you a left-arm option; Plunkett, whose stats in the last five ODIs haven’t been great but who, before that, has been exceptional in the middle overs; and Curran,” he said.

“We haven’t even mentioned [Chris] Jordan, who I think might be a bit of a bolt from the blue to feature somewhere. He will definitely be discussed. It is a really tricky one and if Willey wasn’t a left-armer, he may be most worried. They could fudge it and leave one of the batsmen out – they have Alex Hales who probably won’t start at the World Cup due to the batting depth they have got, so do they need Sam Billings or Joe Denly as well? Denly could be the third spinner, though.” 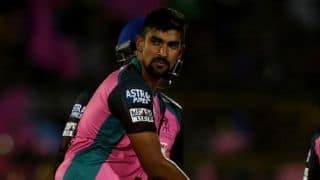