21 years later in Durban, Ravi Shastri meets the child chrsitened after him.

The year was 1990. Strinivasan Pillay, a third-generation South African with Tamil roots, was blessed with a baby boy.

“At the naming ceremony, the astrologer gave us the letter ‘S’. My wife and I were die-hard fans of Ravi Shastri. So we named our son after him,” Pillay said to DNA.

Two years later, Pillay’s dream came true. The Indian team was in South Africa for the ‘Friendship Series’. Pillay, a local cricketer of stature, made his way to the hotel, met Shastri and had his wife click a picture of him and their son with the all-rounder. “I had also requested Ravi to sign a huge poster of his and the same occupies pride of place on my wall,” said Pillay, who is an architect of repute in Durban.

On Friday, Pillay was in for another pleasant surprise. Now a senior official at the KwaZulu-Natal Cricket Union, he heard Shastri was at Kingsmead on commentary duty.

“Hi Ravi,” Pillay said before flashing his high-end cellphone and sharing that picture clicked in 1992. “I named my son after you. He is 23 now. He plays in the local league and bowls off-spin. I would like him to come and see you.” A beaming Shastri could only agree.

Minutes later, Pillay Jr made his way to the commentary box and met his parents’ hero. “Hello young man. It’s great to see you,” Shastri said in his high-pitched voice before the trio posed for a picture all over again. 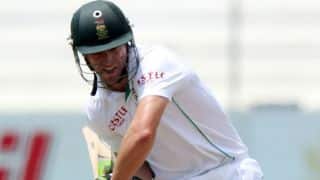