West Indies vs Bangladesh 2018: Bangladesh will be aiming to keep the three-match T20I series alive against West Indies as the action moves to Florida in USA.

Bangladesh would have been hoping to carry their ODI form into T20Is after beating hosts West Indies 2-1 in a three-match series. However, the first T20I at St. Kitts came as a rude shock as they were comprehensively beaten in a rain-affected encounter.

The seeds of their defeat were sown in the very first over when they lost opener Tamim Iqbal and Soumya Sarkar for first-ball ducks. And despite the rescue act from the middle-order, led by Mahmudullah (35), their final total of 143/9 seemed inadequate. The revised target of 91 in 11 overs was chased down with aplomb despite West Indies losing two quick wickets.

Andre Russel hit 21-ball 35 to hand his team a 1-0 lead. The series now moves to USA at Lauderhill, Florida and Bangladesh will hope the change in venue also results in change of fortunes. But first things first, their top-order needs to show more responsibility and not play rash strokes. West Indies have enjoyed playing at Lauderhill having won three out of their four T20Is at the venue while one produced no result. Their batsmen have enjoyed batting here and will be hoping for another good outing.

Bangladesh will be hoping their batsmen will come good in batting-friendly condition.

Weather: Passing showers predicted but it should be fine when the match starts

West Indies: They wouldn’t want to tinker with the winning combination. Should go with the same playing XI as the first T20I.

Bangladesh: Sarkar is enduring a poor form. Shakib Al Hasan might give a chance to Sabbir Rahman or Mosaddek Hossain.

“Sometimes, you have to take the win and be satisfied. The fielding from the boys was pleasing to see. We need to replicate such performances in the next few games too,” – Carlos Brathwaite

“At one stage we were 100 in 11 overs but by that stage we also lost five wickets. It’s tough to make a comeback from that position unless you have someone like Andre Russell or someone like him who can change the game single-handedly,” – Shakib 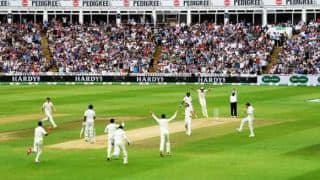 India vs England 2018, 1st Test, Day 4 LIVE Streaming: Teams, Time in IST and where to watch on TV and Online in India