Abbas, who worked as a welder and a leather factory labourer before making his mark in cricket said that he will remain grounded despite his early international success.

With a career-best 5/33 Mohammad Abbas put Pakistan on pole position in the 2nd Test against Australia at Abu Dhabi, similar to how he handed his team the advantage in the 1st Test. In the process,the 28-year-old became the second fastest Pakistan bowler to 50 Test wickets in his 10th Test.

But Abbas, who worked as a welder and a leather factory labourer before making his mark in cricket said that he will remain grounded despite his early international success.

“Look, I have a firm belief in Almighty Allah and I pray that he keeps me away from tough situations,” said Abbas after the end of day s play. “I have played first-class cricket and a lot of things have happened before my eyes.”

“I suffered hardship in my life so my focus is on cricket and that has made me mature. I want to keep my feet on ground, that has been my life and it has matured me,” added Abbas.

Since making his debut against West Indies in Kingston in April last year, Abbas has proved himself as the leader of Pakistan s bowling attack in the longer format, claiming 4 plus wickets in 8 innings out of the 18 he has bowled for Pakistan.

Such has been the impact of the right fast-bowler that he also has the fourth-best average (15.94) — and lowest in this century — among those with 50 or more wickets.

Abbas, however, is not looking too far ahead and is focussed on the job at hand. And about records, he says they are meant to be broken.

“Right or wrong, I know where to go and my focus is to go step to step and whatever happens around me doesn’t bother me. I focus on my bowling and taking wickets for Pakistan and in the process get records, which are made to be broken, he added. We've left ourselves a little bit too far behind the game: Aaron Finch 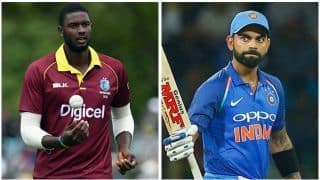