Keshav Maharaj scored a gritty 72 but India bowled out South Africa for 275.

The South African tail wagged to cut down India’s lead but the Virat Kohli-led unit still managed to take 326-run lead on the third day of the second Test of the series at the Maharashtra Cricket Association Stadium in Pune on Saturday.

India had reduced South Africa to 162/8 but the last two wickets added 113 runs to take the visitors to 275. While Keshav Maharaj scored 72, Vernon Philander remained unbeaten on 44. The pair added 109 runs together and denied India a chance to bundle out Proteas below 200.

However, the match still firmly remains in India’s control, with a possibility of a follow-on with two more days to go in the match and a margin of 326 runs at hand.

South Africa resumed the day at 36/3, with nightwatchman Anrich Nortje and Theunis de Bruyn in the middle. However, the two could only add five more runs to the overnight total before Mohammed Shami dismissed Nortje as Virat Kohli took a catch in the slips.

It was Umesh Yadav’s turn then to add one more wicket to his account as he removed de Bruyn to leave South Africa reeling at 53/5.

Two of their most experienced players – skipper Faf du Plessis and Quinton de Kock – then joined forces and put up a 75-run stand. However, just when it looked that the two will make sure South Africa would not lose any more wickets before lunch, R Ashwin struck for the first time in the match as he sent de Kock packing, beating the outside edge to dislodge the bails.

Ravindra Jadeja struck early in the second session as Senuran Muthusamy was dismissed for the first time in the series. While du Plessis brought up his second fifty of the series, Ashwin struck to end his stay in the middle. 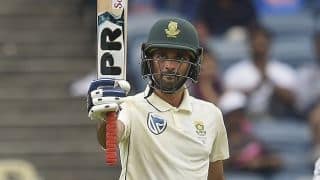