Sri Lankan captain Dimuth Karunaratne said on Wednesday he wanted his players to continue playing with a smile on their faces as they seek to become the first Asian team to win a Test series in South Africa.

Sri Lanka go into the second Test at St George s Park on Thursday with an unbeatable 1-0 lead in the two-match series after their sensational, Kusal Perera-inspired one-wicket win in the first Test in Port Elizabeth.

“We came here to win matches,” said Karunaratne, who was handed the captaincy after Dinesh Chandimal was axed after losing a series in Australia last month.

“I just want to make sure the boys give their maximum each day.”

“We have to keep our heads clear and play positively, he said.

“We want to enjoy ourselves. You will see with our boys when they are playing they are smiling and cheering each other. If you are enjoying yourself you will play well.”

The Sri Lankan captain said conditions in Durban and those expected in Port Elizabeth were much easier than those in Australia, where they played on fast, bouncy pitches.

Although Sri Lanka were beaten by 206 runs on their previous appearance in Port Elizabeth two seasons ago, Karunaratne said they had played well enough to go into Thursday s match with confidence.

“We were in control for most of the (first) Test, then something brilliant took it away from us,” he said of Perera s match-winning innings.

“The disappointing thing with a short series is that you only play two matches so for us it is making sure we square up the series.”

The pitch had a good covering of grass but Du Plessis said he expected a “normal” St George s Park pitch.

“It looks pretty similar to what we played on against Australia and Sri Lanka in our last two Test matches. Hopefully there will be some assistance for our seamers. We are not expecting a lot of pace and bounce so we re just hoping there will be decent carry.”

Du Plessis admitted that Sri Lanka s inexperienced bowlers, notably Vishwa Fernando and Lasith Embuldeniya, had brought an element of the unknown and a surprise factor to the touring team s attack.

There has already been a bit of chat to make sure we play the new guys better, he said.

Du Plessis hinted that all-rounder Wiaan Mulder, who turned 21 on Tuesday, could make his Test debut in place of the injured Vernon Philander.

“I see a role for him for the Proteas moving forward as a batting all-rounder, batting at number six or seven and bowling those extra ten overs that you need.” 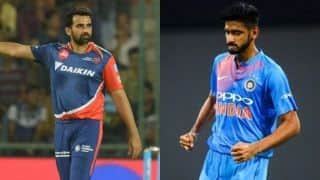