Afghanistan dominated the third and the final ODI of the three-match series against Ireland at Civil Service Cricket Club, Belfast on Friday to clinch the series 2-1.

Afghanistan dominated the third and the final ODI of the three-match series against Ireland at Civil Service Cricket Club, Belfast on Friday to clinch the series 2-1.

The visitors bundled out Ireland for 124 in 36.1 overs before chasing down the target with eight wickets in hand and 23.5 overs.

Opting to bat first, Ireland never got going losing opener Paul Stirling for two in the third over to fast bowler Aftab Alam before fellow opener and skipper William Porterfield walked back for 14 in the ninth over handing Alam his second wicket.

Afghanistan bowlers maintained their stronghold over the hosts as Ireland kept losing wickets at regular intervals.

The best partnership for Ireland came for seventh wicket when Gary Wilson (23) combined with Andy McBrine (16) for 37 runs. Andrew Balbirnie, who scored back-to-back half centuries in the first two games could only manage 17.

For Afghanistan, Alam returned two for 22 in his seven overs, while Rashid Khan claimed three for 18 in his eight overs. Gulbadin Naib and Mohammad Nabi added two scalps each and skipper Asghar Afghan chipped in with one in his one over.

In chase, Afghanistan lost Mohammad Shahzad early for one to Boyd Rankin in the second over before opener Ihsanullah Janat (57*) and Rahmat Shah (33) combined for a 50-run stand for the second wicket.

Janat then joined forces with Hashmatullah Shahidi (34*) for an unbeaten association of 74 runs to lead Afghanistan to a facile win and a memorable series victory. 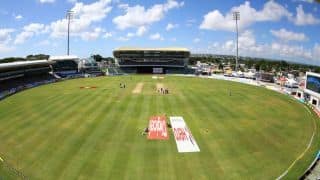