New Zealand set Pakistan a target of 280 runs to win the series-deciding third and final Test.

New Zealand set Pakistan a target of 280 runs to win the series-deciding third and final Test after declaring their second innings at 353-7 on the fifth day in Abu Dhabi on Friday.

Kane Williamson failed to add to his overnight score of 139 while Henry Nicholls remained unbeaten on 126 after New Zealand resumed on 272/4.

Pakistan have a minimum of 79 overs to reach the target. Legspinner Yasir Shah finished with 4-129, finishing on 29 wickets for the series.

The three-match series is tied at 1-1 after New Zealand won the first Test in Abu Dhabi by four runs before Pakistan bounced back with victory by an innings and 16 runs in Dubai. 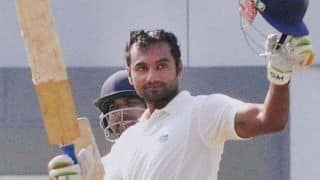 Never thought I'd achieve something like this: Paras Dogra on record-breaking eighth double-century