Rohit Sharma recorded his maiden Test double century off 249 balls as India strengthened their position in the third Test against South Africa.

Rohit, in his third Test as opener, reached the landmark with a pull shot for a boundary first ball after lunch to bring up the feat.

During his marathon innings, Rohit also became the first India opener since Virender Sehwag to rack up over 500 runs in a three-match Test series.

Sehwag had tallied 544 runs in six inning against Pakistan in 2005 at a staggering average of 90.02 with two centuries. Vinoo Mankad, Budhi Kunderan and Sunil Gavaskar are the other Indian openers to do so.

During his knock, Rohit took his Test average at home to over a 100, next to Don Bradman’s average of 98.22. Rohit added 267 runs with Ajinkya Rahane, which is the highest fourth-wicket partnership.

Rohit is the first Indian to score 500+ runs in a Test series vs South Africa, the previous being Mohammad Azharuddin’s 388 runs at home in 1996/97.

Resuming on their overnight score of 224/3, Rohit and Rahane continued when they’d left off on Day 1. Rahane, after three years and 26 innings, scored his first Test century at home, while Rohit found his groove and switched gears as the session progressed. In 27 overs, India scored 133 runs at nearly five runs an over with South Africa’s only reason to cheer being the wicket of Rahane.

Shortly after reaching his 11th Test ton, Rahane, trying to be cute, attempts at getting the ball past the wicketkeeper but manages to tickle the ball in its way to Klaasen’s gloves. Rahane departs for 115, and becomes Line’s maiden Test wicket. 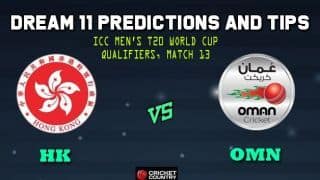