From 39/3, Rohit and Ajinkya Rahane seized control of the proceedings with an unbeaten partnership of 185 for the fourth wicket.

Rohit Sharma’s dream run in Tests continued with the India opener bringing up his third century of the series. Rohit struck a superlative sixth Test ton to guide India to 224/3 before bad light forced early stumps on Day 1 of the third Test against South Africa in Ranchi. From 39/3, Rohit and Ajinkya Rahane seized control of the proceedings with an unbeaten partnership of 185 for the fourth wicket.

Along the way, Rohit smashed the record for the most sixes by a player in a series, going past West Indies’ Shimron Hetmyer, who’d cleared the rope 15 times in Bangladesh last year. Rohit hit 13 sixes in the first Test in Vizag, and although he was dismissed cheaply in Pune, the opener roared back with four sixes (and counting), the fourth of which fetched him the record.

Rohit became the first India opener since Sunil Gavaskar to score more than two centuries in a Test series. Gavaskar had gone past hundred four times in his maiden Test series against West Indies in 1971. Incidentally, both Rohit and Gavaskar scored their hundreds as openers.

India, from 71/3, scored at over five runs an over in the afternoon session with Rahane giving Rohit company. He hit three boundaries in an over off Rabada shortly into the second session before Rohit took over. With a delightful straight drive, Rohit brought up his half-century. Off his first 55 balls, Rohit had scored only 23 runs, before switching gears to peel off 78 off the next 75. After weathering the Rabada storm initially, Rohit and Rahane took 138 balls to bring up the century-stand.

Rahane brought out some equally attractive strokes and notched up his 21st Test half-century to drive India forward. As rain started to come down with the groundsmen ready to rush in with the covers, Rohit went off Dane Piedt to bring up his century. Rahane joined the fun and cleared the rope off Piedt’s next over as India motored along. Only six overs were possible after the tea interval in which India scored 90 runs before the light was deemed unsuitable and the players walked off.

In the first session, South Africa pacers Rabada and Anrich Nortje had India in trouble. They lost opener Mayank Agarwal, Cheteshwar Pujara and skipper Virat Kohli cheaply with Rabada bowling a fiery spell first up to stop the hosts from getting off the blocks.

After India handed Shahbaz Nadeem his Test debut and opted to bat, Rabada bowled with his tail up and was rewarded immediately with the wicket of Agarwal, after the batsman had collected a couple of early boundaries. Rabada set him up nicely, bowling straight lines before getting one to move away to which Agarwal poked and offered a catch to Dean Elgar at third slip.

Pujara, the new batsman faced eight balls, before the next one rapped him on the pads. Originally given not out by the umpire, South Africa went upstairs, and the decision was overturned with the ball hitting Pujara’s back leg stuck right in front of middle.

Rabada and Anrich Nortje peppered Kohli and Rohit with a few snorters outside off and peppered them with bounders. South Africa could have seen the back of Rohit when the Richard Illingworth raised his fingers to give the opener out, but a big inside edge gave Rohit a lifeline and he carried on.

It took Rohit 13 overs before he could score his first boundary a pull that took his glove and went past the ropes but once the deadlock was broken, he four more in the next six, including a couple of crisp pull shots, the ball dropped marginally short. In the last over before lunch, Rohit brought out his trademark pull shot again to clear the rope.

Kohli, having struck a couple of boundaries, endured a rough call. Nortje pitched one up, which moved after hitting the deck and rapped the India captain on the pads. A huge appeal followed and Nigel Long was quick to raise his finger. However, as per the replay, the ball did just about enough to clip the leg stump, much to the amusement of Kohli and to give Nortje his maiden Test wicket. Rahane faced 20 balls for 11, including a boundary and added 32 off 45 with Rohit. 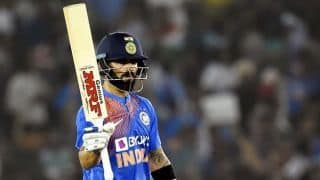