The Dinesh Chandimal-led team have flattered to deceive and it is safe to say that England have got a stiffer competition from the persistent rains than the host team.

Sri Lanka have so far played 16 ODIs in 2018, winning just five with one ending in no result. Two of those wins came against a heavily rejigged South Africa after conceding the series. Against England, Sri Lanka are 0-3 in four matches and will be hoping it get a consolation win against the World No.1 ODI team in the fifth and the final ODI.

The Dinesh Chandimal-led team have flattered to deceive and it is safe to say that England have got a stiffer competition from the persistent rains than the host team. The fourth ODI was Sri Lanka s best performance in the series so far with the middle-order showing some spunk led by Dasun Shanaka, but the top-order still remains a problem – added to that injuries woes, Sri Lanka have had it tough.

England, on the other hand, would be fairly happy with the results, but the rain interventions have had a huge impact on the proceedings and they have not been able to play to the full potential in the series so far.

After being left out of the Asia Cup, Niroshan Dickwella has strung up scores of 52 and 36, but Sri Lanka will hope that the wicketkeeper-batsman converts his starts. Kusal Mendis had totalled just five runs in his last four ODIs and the talented, but terribly out of form batsman is most likely to make way for the veteran Upul Tharanga.

England will be looking to try out their rest of the squad for this final ODI and that means Joe Denly, Sam Curran and Mark Wood could get a game with Jason Roy, Olly Stone, Ben Stokes and Chris Woakes making way,. Liam Plunkett, who joined the squad late following his wedding could also be in the XI. Bairstow s injury means Alex Hales will keep his place at the top from the fourth ODI.

Adil Rashid is the second most successful bowler in ODIs this year with 41 wickets following Rashid Khan (48). 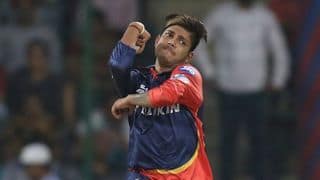