After conceding the series, Sri Lanka produced their best cricket in recent memory in the dead rubber against England winning the fifth and the final ODI by 219 runs (D/L) at the R Premadasa Stadium, Khettarama, Colombo on Tuesday.

After conceding the series, Sri Lanka produced their best cricket in recent memory in the dead rubber against England winning the fifth and the final ODI by 219 runs (D/L) at the R Premadasa Stadium, Khettarama, Colombo on Tuesday. Sri Lanka’s margin of victory was the second highest in an uninterrupted contest.

Opener Niroshan Dickwella made an enterprising 95 off 97 deliveries, combining for an opening stand of 137 runs with Sadeera Samarawickrama (54) in 19.1 overs. Dinesh Chandimal (80) and Kusal Mendis (56) then pushed Sri Lanka’s total to 366/6.

In defence, SL pacers reduced England to 28/4 before the spinners strangled the World No.1 ODI team. When rain played spoilsport, England were on the verge of a big loss at 132/9.

Jason Roy was cleaned up by Kasun Rajitha in the first over followed by the wickets of Alex Hales (0) and stand-in skipper Jos Buttler (0) in the second over by Chameera.

Root was sent packing for 10 by Chameera before Moeen Ali and Ben Stokes arrested the slide with a stand of 79 runs. But Dananjaya claimed Ali for 37 and Stokes for 67. He proceeded to add two more wickets in the form of Adil Rashid and Liam Plunkett.

Earlier, opting to bat first, Dickwella and Samarawickrama had combined for Sri Lanka’s first 100 plus opening-wicket stand in 30 ODIs.

The fall of Samarawickrama – cleaned up by Moeen – brough skipper Chandimal to the crease and after the removal of Dickwella by Ali, in the 26th over, took over the sheet anchor role. Mendis, who had totalled just five runs in his last four ODIs, got back in to form with a breezy 33-ball 56 with the help of six sixes and one four. He was taken by Liam Plunkett.

Chandimal then accelerated taking Sri Lanka past the 300-run mark before falling to Tom Curran for 80. Curran removed Thisara Perera in the same over for 11 to dent SL’s progress. 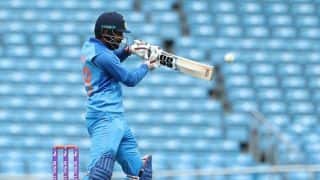 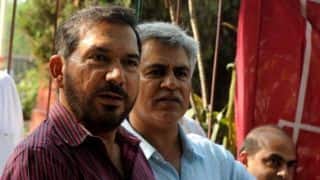