Despite the presence for Saqlain Mushtaq as England's spin consultant, Moeen Ali turned to India's Harbhajan Singh to help him figure out how to better utilise the conditions at the Kia Oval

Despite the presence for Saqlain Mushtaq as England’s spin consultant, Moeen Ali turned to India’s Harbhajan Singh to help him figure out how to better utilise the conditions at the Kia Oval after being dissatisfied with the way he bowled on Saturday against India in the ongoing fifth and final Test.

In Southampton, offspinner Moeen marked a memorable return to Test cricket with match winning figures of 9/134 as England clinched the series 3-1. However, at The Oval, he went wicketless on Day 2 when England reduced India to 178/6. Not happy with the way he couldn’t make use of the rough outside the right-hander’s offstump, Moeen asked for Harbhajan’s help.

The result was evident as he provided a vital breakthrough for England with the scalp of debutant Hanuma Vihari on 56. His strike broke a dangerous partnership that swell to 77 runs. He later on broke through the resistance of No. 9 Ishant Sharma who had consumed 24 deliveries before being out caught behind on 4. Moeen finished with figures of 2/54 from 21 overs.

“Moeen felt that he wasn’t doing enough with the rough outside the offstump and that’s why he asked me how to have a look at how he was going about his business,” Harbhajan was quoted as saying by The Times of India on Monday. “I told him that he was doing just fine, just that he was trying a little too much to hit the rough. But this pitch, unlike Ageas Bowl, doesn’t have huge cracks, so it is more about bowling on a good pitch,”

Harbhajan, who has 417 wickets in 103 Tests, advised Moeen to not overdo and be patient. “Sometimes, when the cracks are not that big, the outside edge comes as much into play as the inside edge. I told Moeen he wouldn’t get those inside-edge bat pads as easily as he was getting at Ageas Bowl. So all he needed to do was relax and go about his job,” the 38-year-old said.

Bhajji was happy that Moeen heeded his advice and feels the Englishman might have a bigger role to play in the Test once the cracks on the pitch widen. “It’s good to see that Moeen followed what I said. The cracks could get bigger in the second innings and then the dynamics may again change,” he observed.

Harbhajan is currently in England for commentary duties. John Lindsay Guise: The man who opened batting at Eden Gardens against MCC in 1926-27 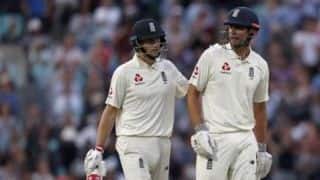