Achrekar was conferred with the Dronacharya award in 1990 for his services to cricket coaching and in 2010 was bestowed with the Padma Shri award.

Ramakant Achrekar, the legendary cricket coach, who shaped up Indian icon Sachin Tendulkar s illustrious career which spanned over a period of 24 years (1989-2013), passed away peacefully in Mumbai on Wednesday. He was 87.

Achrekar was conferred with the Dronacharya award in 1990 for his services to cricket coaching and in 2010 was bestowed with the Padma Shri award.

Members of the cricket fraternity along with Twitter saluted one of Mumbai cricket s famous mentors.

My heartfelt condolences on the passing away of #RamakantAchrekar Sir , who was instrumental in giving a jewel to Indian cricket. pic.twitter.com/qUZzG5Guf9

Sad to hear about Ramakant Achrekar Sir s passing away. May his soul RIP. Cricketing World will always remember you for your contribution. pic.twitter.com/asLgWFhpvA

Condolences to his family and loved ones on the passing away of #RamakantAchrekar sir, who shaped and gave us a gift called Sachin Tendulkar ! pic.twitter.com/S7LIhNV4rh

Sad to know that Ramakant Achrekar sir is no more. My homage to the great soul and condolences to the family. #Achrekarsir

The BCCI expresses its deepest sympathy on the passing of Dronacharya award-winning guru Shri Ramakant Achrekar. Not only did he produce great cricketers, but also trained them to be fine human beings. His contribution to Indian Cricket has been immense. pic.twitter.com/mK0nQODo6b

Very very sad news: Ramakant Acharekar, the man who was a guru to many Indian test stars, starting with the legendary @sachin_rt is no more.. will never forget him on his scooter, cap on, ready smile;

Ramakant Achrekar is no more. Deepest condolensces to the family and to his students including Sachin Pravin Amre and Atul Ranade. Will forever live in peoples hearts in India. Thanks Sir for all you did for Indian cricket.

Most endearing and admirable aspect of this guru-shishya relationship was that Acharekar never clamoured for recognition for his role in a genius s development, but @sachin_rt never forgot to acknowledge this pic.twitter.com/Pa3rvbqO5T 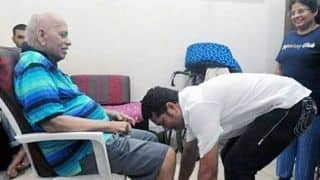