Sri Lanka captain Angelo Mathews came down heavily on his batsmen saying they put up a shocker of a performance in both their matches of the ongoing Asia Cup 2018 in the UAE. After a stunning 91-run defeat at the hands of Afghanistan, five-time winners Sri Lanka were eliminated from the competition on Monday night.

Sri Lanka lost their opening game to Bangladesh by 137 runs on Saturday. The twin defeats mean Bangladesh and Afghanistan will progress to the next round.

Chasing 250, Sri Lankan batsmen again put up a disappointing show as they were bowled out for 158 in 41.2 overs.

“It’s been a shocking performance by the whole team,” Mathews said after the match. “Even in the first game, we were bowled out for 150-odd [124]. Congratulations to Afghanistan, they outplayed us in all the departments. Batting has let us down in both the games.”

Mathews put the blame of a nightmarish performance on his batsmen saying they failed to complement the good work done by the bowlers who restricted the opposition teams in both their league games to within gettable totals.

“Our bowlers have done their bit in both the games. We began badly but repaired the damage a bit for the second wicket. But we lost our way in the middle overs. We didn’t have answers. I thought the bowers did well, the fielding was also better than the previous game. The batting unit to be blamed. It was shocking,” he said.

Before the Asia Cup, Sri Lanka hosted South Africa for five ODIs in August. The hosts surrendered the series after losing the first three matches but made ended the series on a high after winning the remaining two games.

Recalling their improved show against South Africa, Mathews said, “We played better cricket against South Africa towards the latter part of the series. [But it’s been] very disappointing to see the way boys went about things in both the matches. We have repeated mistakes. We couldn’t handle the pressure and were nowhere near our best.” 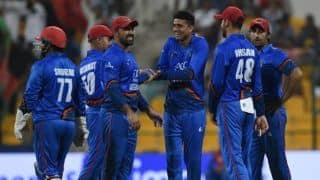