Sunrisers will be hoping to post a big total on board against a struggling Mumbai batting unit.

Put in to bat first, Sunrisers Hyderabad have lost both their openers, managing 44 runs from the first six overs against Mumbai Indians in this crucial IPL 2014 encounter at Dubai. Mumbai are experiencing the worst phase in their IPL history, and will be keen to register their first win tonight.

After losing the toss and being put into bat first, Sunrisers Hyderabad started off well, managing 10 runs off the first over from Zaheer Khan. Aaron Finch nicely guided away two boundaries off his pads in the first over to get things rolling under way. After using Lasith Malinga as the first change bowler in the last few matches, Rohit Sharma introduced the Sri Lankan speedster as Zaheer’s opening partner. 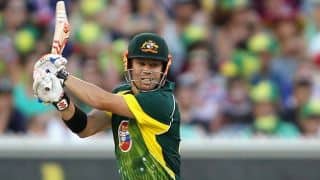