Twice on their tour of the UAE, Australia have been at the receiving end of a Decision Review System (DRS) which has been termed strange by Aaron Finch.

Twice on their tour of the UAE, Australia have been at the receiving end of a Decision Review System (DRS) rule which has been termed strange by Aaron Finch.

Late on Day 2 , as Pakistan continued to build on a big lead, spinner Jon Holland pinned Azhar Ali in front on 53. Australia reviewed the decision after on-field umpire turned it down.

Despite the delivery meeting all the criteria – pitched in line with the stumps, tracker showing the ball would have crashed on the stumps Ali was saved because of his long stride that brought into play ‘three-meter’ rule which was added to playing conditions in 2011. As per it, the ball-tracking technology cannot be trusted to precisely predict the direction a ball would take after pitching and the three-meter ruling takes this fact into account.

Australia first came to know of the rule when they were denied an lbw decision against Haris Sohail in the first Test against Pakistan in Dubai.

“We didn t really know about it until last Test, about the three metres,” Finch was quoted as saying by Cricket.com.au. “Pitching in line, hitting in line, hitting the stumps, to me that’s strange. I understand the element of predicting the path of the ball. That s something that s gone against us a couple of times, but that s the game, that s the rule, and we ve just got to deal with it.

Australia captain Tim Paine wasn’t happy with the turn of events as Pakistan ended the day with 144/2 having extended their lead to 281 runs. He was seen having a discussion with the umpires after the end of day’s play.

“Yeah it was just a bit of confusion again. Where they re three metres down the wicket, if it’s still hitting the stumps and hitting in line, can we tinker the rule?” Finch said.

“I know it’s sounding sour at the moment because we’ve been on the receiving end, but it’s certainly not. We understand where the rule’s at now. But maybe if it’s hitting in line and if all three are still red, maybe there’s a chance to overturn it.” 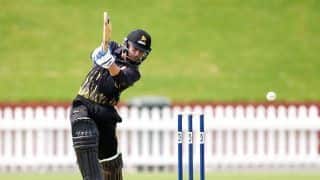