England survived two tense sessions against South Africa before rain intervened, and the second Test of the Basil D’Oliveira Trophy 2015-16 at Newlands ended in a draw. Dane Piedt bowled his heart out, taking 3 for 38 to make a match out of the Test following Hashim Amla’s enterprising declaration, but it was not enough in the end. The match was lit up over the first two days by an outrageous, once-in-a-lifetime innings by Ben Stokes (supported by Jonny Bairstow), while Amla, AB de Villiers, Faf du Plessis, Temba Bavuma, and Chris Morris all put up gritty performances to restore balance to the Test. LIVE CRICKET SCORECARD: South Africa vs England 2015-16, 2nd Test at Cape Town, Day 5

One record that probably eluded the keenest of eyes was the feat of de Villiers (how does one keep him out of action?). When he caught Alex Hales at slip in the first innings off Morne Morkel, he became only the second South African after Mark Boucher to reach 200 dismissals in Test cricket. Live Cricket Score, South Africa vs England 2015-16, 2nd Test, Day 5 at Cape Town

Three men on the above list — Boucher, Kallis, and Smith — also played for ICC World XI.

– Boucher took 2 catches as wicketkeeper for ICC World XI, which takes his tally to 555.

– Kallis took 4 catches as fielder for ICC World XI, which takes his tally to 200 (at par with de Villiers).

– Smith took 3 catches as wicketkeeper for ICC World XI, which takes his tally to 169. 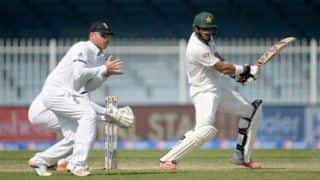 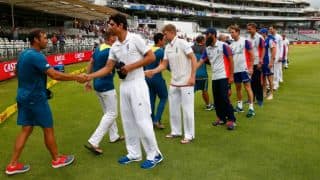