South Africa registered a thumping win over the visiting New Zealanders in the first Twenty20 International (T20I) at Durban. South African bowlers first restricted New Zealand to a modest total of 151 for eight in their 20 overs and then finished the job quite well with the bat, to win by a margin of six wickets. AB de Villiers, who captained the side in absence of Faf du Plessis, didn’t hold back the praises for his team’s performance. “Enjoyable day at the office! This T20 Protea team has a ver special energy about it that excites me moving forward,” skipper said. ALSO READ: Hashim Amla, AB de Villiers guide South Africa to 6-wicket win vs New Zealand in 1st T20I at Durban

He went on to hail the bowlers for regaining control in the first innings after Kiwi openers Kane Williamson (42 off 21 balls) and Martin Guptill (42 off 37) had given the Black Caps a good start and then had kind words about the batting. “Steady performance again by an ever improving Dave Wiese and also Aaron Phangiso who showed great skill in slowing the game down and swinging the momentum in our favour,” de Villiers said. “Solid batting performance followed and we’re happy to be 1-0 up.” SCORECARD: South Africa vs New Zealand, 1st T20I at Durban

De Villiers emphasised on the need to keep improving. “In saying all of that, lots of room to get better and that’s exactly the plan with our next game at my favourite ground of them all, Supersport Park, Centurion. See u guys there,” De Villiers concluded. 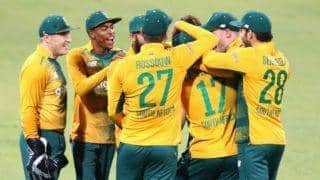 David Warner speaks about his responsibilities as Australia vice-captain