Cricket legend Barry Richards believes AB de Villiers should give up the South Africa's one-day captaincy if he decides to prolong his international career.

South Africa great Barry Richards believes AB de Villiers should give up the South Africa’s one-day captaincy if he decides to prolong his international career. One of the outstanding batsmen of his generation, the 33-year-old de Villiers headed home after captaining the Proteas in a 19-run defeat by England in Cardiff on Sunday that saw them beaten 2-1 in a three-match Twenty20 series. ALSO READ: AB should step away from ODI captaincy, feels Graeme Smith

They previously lost a one-day international series to England by the same scoreline and then suffered a hugely disappointing first-round exit at the ICC Champions Trophy 2017. But a Test series against England is the centrepiece of a four-month tour. However, it has long been planned that de Villiers would miss the four-Test campaign to take a break from the strain of being one of the world’s leading players in all three international formats. READ MORE: AB likely to quit Test cricket to prolong limited-overs career

“The de Villiers thing has escalated,” said Richards, arguably the world’s leading batsman in the early 1970s, at a press conference staged by Test series sponsors Investec in London on Thursday. “It’s become a bigger issue than it should have been. It should have been managed a lot better a long time ago,” added Richards, who played just four Tests but made two hundreds and averaged over 72, before South Africa’s apartheid-enforced isolation ended his international career

De Villiers was only leading the Twenty20 side in place of Faf du Plessis, who is back in South Africa expecting the birth of his child. Du Plessis is also South Africa’s Test skipper but the imminent birth of his child means the batsman is also set to miss next week’s first Test at Lord’s, which starts on July 6, with Dean Elgar leading the side.

Richards said there was no reason why du Plessis could not captain in all three international formats.

“I think AB is up to here with cricket,” said Richards, one of the game’s pioneering globetrotters in a career that saw him play in England and Australia as well as South Africa’s Natal province, while pointing to his neck.

“I think he’d like to go the independent contractor route,” explained Richards, who had a staggering average of nearly 80 in five ‘Supertest’ appearances for the World XI in Kerry Packer’s rebel World Series Cricket in Australia in the late 1970s — the forerunner for today’s lucrative Twenty20 leagues around the world, where de Villiers is a player in high demand.

“He’s got a young family, he’s away (from home) a lot. If he wants to continue playing (for South Africa he should give away the captaincy. Faf (du Plessis) has done a very good job and I think he can do a good job in all three formats. If AB wants to carry on playing he should give away the captaincy and concentrate on his batting. He’s a wonderful player but in the last few months I don’t think we’ve seen the best of him.”

De Villiers, who has scored more than 8,000 runs in 106 Tests, including 21 hundreds, at an average of over 50, said in Cardiff that he planned to meet with Cricket South Africa officials in August to “make a final decision about what happens for the next few years”.

De Villiers, who has been troubled by elbow problems in recent times, added his “main dream” was to a win the World Cup something South Africa have yet to achieve ahead of the 2019 edition of the one-day tournament in England.

That led to speculation he could be on the verge of retiring from Test cricket. 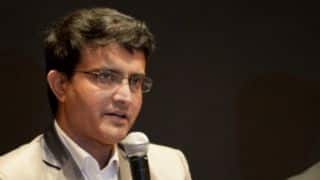 Sourav Ganguly: BCCI not keen on bringing T20 to Olympics