Johannesburg: England all-rounder Chris Woakes has said that temporary South African skipper AB de Villiers has more impact on the team than Hashim Amla, ahead of his first match as a Test captain against England. Amla, whose leadership received sharp criticism since the start of the England series, had stepped down as Proteas Test skipper shortly after the conclusion of the drawn second Test against England at Newlands. Talking about the opening match in Kingsmead, Woakes said that Amla doesn’t seem to be leading his side as much as a normal captain would do, Sport24 reported. ALSO READ: Russell Domingo hits back at critics following Hashim Amla’s resignation as South Africa Test skipper

The 26-year-old, who was not surprised by Amla stepping down from the post, admitted that although everyone leads the team in their own style, he said that De Villiers seemed to be having more input on certain things than the former skipper during the first two Tests. England are currently leading 1-0 in the four-match series following the second Test against England ended in a draw.

Earlier, England skipper Alastair Cook expressed his disappointment over Hashim Amla s resignation as South African Test captain. Amla had stepped down as Proteas Test skipper shortly after the conclusion of the drawn second Test against England at Newlands on Wednesday. Describing Amla as a `nice` personality, the 31-year-old said that the outgoing skipper would have his reasons to resign from the post. Cook, who considers captaincy as a huge honour, admitted that huge pressure is associated with the job. ALSO READ: Hashim Amla thanks fans for support after resigning as South Africa Test captain

De Villiers will lead South Africa in the last two Tests against England in Johannesburg and Centurion. 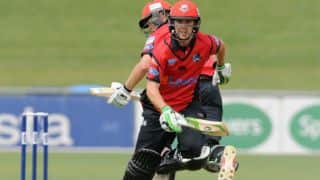