De Villier went on to make a stunning knock of 149 off just 44 deliveries.

South African skipper AB de Villiers‘s staggering 31-ball ton has earned him a praise from compatriot and former captain Ali Bacher, who says that the swashbuckling player is the most brilliant and innovative batsman the world has ever seen.

Describing his shot as unprecedented, Bacher said that he had watched him play shots no one else had ever played before, adding that the extraordinary part was that he didn’t practice them, Sport24 reported.

De Villiers, who recorded the fastest ton in ODI history, went on to make a stunning knock of 149 off just 44 deliveries that saw his side achieving 148-run victory over the West Indies in Johannesburg.

Bacher further said that De Villiers’ instinctive genius at the crease sets him apart, adding that he was a humble and respectful human being, the report added. 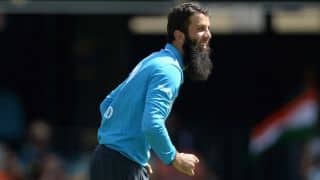 India vs England, 3rd ODI at Brisbane: England lose early wicket as Moeen Ali is out for eight