Zimbabwe A stood out above the indifferent bowling and fragile top-order batting that were responsible for home side s third successive defeat vs Afghanistan A.

Four fine individual performances for Zimbabwe A stood out above the indifferent bowling and fragile top-order batting that were responsible for home side s third successive defeat at the hands of the rampant Afghanistan A team, this time by 20 runs, at Harare Sports Club. Pride of place goes to Innocent Kaia, whose magnificent innings came through another disastrous top-order collapse by the Zimbabwe A batsmen, and Ryan Burl who played another excellent innings in support. Tendai Chatara began the match with a superb opening spell that removed the Afghan openers for just a single run between them, while Nathan Waller bowled a very tight 10-over spell that his team-mates were unable to copy, and almost brought off an incredible victory at the death. Zimbabwe A succumb to 55-run loss against Afghanistan A

But the bottom line was another defeat for Zimbabwe A and the five-match series to Afghanistan A. There was heavy rain overnight and conditions were still very damp, although the sun was shining, when Zimbabwe A won the toss, and took what appeared to be the wise decision in these circumstances in putting the tourists in to bat, as long as the weather had no more serious shocks in store. Zimbabwe A played an unchanged team in this match, despite the dismal performance of most of their leading batsmen thus far in the series.

Chatara found the conditions to his liking in his first over, beating the bat a couple of times with movement on the pitch. Off the fifth ball the Afghans new opening batsman Karim Sadiq took what appeared to be a desperate swing at the ball and edged a catch to the keeper Ryan Murray, without a run on the board the only contact bat made with ball during that first over. Afghanistan A beat Zimbabwe A by 5 wickets in 1st ODI

Chatara continued to relish the conditions, as he struck again in his second over, removing Nasir Khan (1) who edged his defensive stroke to the keeper; three for two wickets. Although the batsmen were fairly comfortable with Neville Madziva, they continued to find it hard to get a full bat on to Chatara s deliveries, and he did not concede a run until the final ball of his fourth over, when Younas Ahmadzai slashed a thick edge through point for four.

The Afghans scored only 20 runs off the first 11 overs, but when Carl Mumba replaced Madziva the runs began to flow, and 13 runs came off his second over, 12 of them to Ahmadzai, while Waheedullah Shafaq played a quiet role. Chatara finished his superb opening spell with figures of six overs, three maidens, eight runs for two wickets.

The team fifty came up in the 17th over, 34 of them to Ahmadzai, and the pitch was beginning to flatten out now under the warm sun. While Shafaq grew more confident, Ahmadzai did become rather bogged now, although reaching his fifty off 69 balls. Immediately afterwards Shafaq pulled a short ball from Waller straight at midwicket and departed for 42, the total now being 95 for three after 27 overs.

The team hundred duly followed after 29 overs, with Khaibar Omar now at the crease. Waller bowled his 10 overs without a break, returning the economical figures of one for 36. The batsmen gradually went on the attack, and after 40 overs the score was 162 for three, a good launching pad for an all-out assault during the final 10.

The Afghan batsmen were particularly strong on the pull when the bowlers pitched too short, and hit some big sixes from that stroke. Ahmadzai reached his century off 112 balls, a fine innings, coming in as he did with the two openers out for one run between them. He reached 104 and was then bowled by Madziva, returning for his final spell, as he went for a big hit; the partnership with Omar had put on 99 runs and the score as 194 for four in the 45th over.

This only brought in Shafiqullah, who hit ferociously, at one stage hitting four successive sixes, two off Madziva and two off Chatara. His fifty came off just 17 deliveries, while Omar s went almost unnoticed off 62 balls. After the 50th over had been bowled, the score had rocketed to 279 for four 83 runs had come off the final five overs and Shafiqullah was unbeaten with 70 off 23 balls, with three fours and eight sixes, while Omar had 54 off 65.

Apart from Chatara s opening spell and the consistency of Waller, much of the bowling had been poor, and the score would have been higher were it not for skilful placement by PJ Moor, the captain, of his boundary fielders. Mumba was especially disappointing with the ball, after his five wickets in the previous match, and his eight overs cost 60 runs he often bowled much too short and suffered for it.

So great was the onslaught at the end that even Chatara had no idea where to bowl, and he finished with two for 52, his final four overs going for 44. Several possible catches or run-outs also went down in the field, to add to the home team s discomfort. Zimbabwe A began their chase cautiously, and soon received a setback, as in the fourth over Nawaz Khan produced a fast yorker that beat and bowled Brian Chari for three.

Tarisai Musakanda was soon underway with a cracking cut for four, but then he chopped a ball from the medium-paced Mohammad Ibrahim on to his stumps to make the score 10 for two. This became 13 for three as Ibrahim in his next over moved the ball back in to bowl out Moor for two. Kaia showed some fight with two successive boundaries off Khan, and his new partner was Burl, who had fought so superbly in Sunday s match.

At this stage there was little real hope of victory, but there was always hope of a fightback, and this is what happened. They handled the Afghan bowling superbly, playing each ball on its merits and keeping the score ticking over all the time. In the 28th over a cut for four by Burl brought up the team hundred, and in the following over Kaia reached an admirable fifty, which took him 90 balls.

The required run rate now was eight an over, and inevitably climbing. Not long afterwards Burl reached 50 off 73 balls the pair were now making batting look so easy, in contrast to their team-mates at the top of the order. The partnership added 156 runs, and finally came to an end in the 40th over as Burl, attempting a six, holed out on the midwicket boundary for 70, scored off 90 balls and containing just three fours and a six, which shows how well he worked the ball around the field for ones and twos.

The total was now 170 for four and the required run rate over 10. Ryan Murray did his best to attack the bowling, and scored 18 off 12 balls before Khan held a sharp high return catch; 208 for five in the 45th over. Waller came in and hit Ziaurrahman Akbar for two huge sixes, as Kaia reached 99 after 47 overs.

Off the next ball Kaia pushed a leg-side single to reach a superb fighting century, which took him 154 balls. Unfortunately he missed the distinction of carrying his bat through the 50-over innings, as he started on an ambitious second run from a stroke by Waller, and turned back too late, to be run out; 236 for six in the 48th over.

The home side needed 32 off the final two overs, possible in theory but highly unlikely in practice. Waller s big hitting was Zimbabwe s only chance, but Nasir Khan bowled the penultimate over too tightly and only nine runs were possible. Waller faced Nawaz Khan for the final over, but the first ball knocked out his leg stump as he went for the obligatory big hit; he scored 33 off 14 balls, including three sixes.

Mumba and Madziva, doing their best, were caught off skyers, and the match was over with Zimbabwe A 20 runs in arrears. Four Zimbabwe players did wonderfully well for their side, but there are others who should be in danger of their places for the fourth match of the series, at Harare Sports Club on Friday. 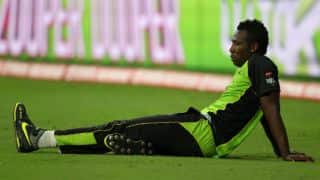 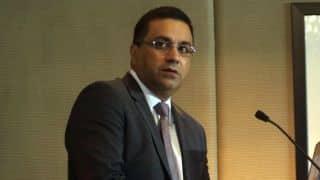