Afghanistan will hope to take a leaf out of giant-killers Ireland's books.

Karachi: Afghanistan hope to follow the World Cup giant-killing blueprint drawn up by fellow outsiders Ireland when they make their debut at the game’s showpiece tournament, the ICC Cricket World Cup 2015.

Ireland defeated mighty Pakistan to reach the Super Eights stage at the ICC World Cup 2007 in the Caribbean before defeating England in a high-scoring match in the 2011 tournament in India.

“My wish would be to emulate what Ireland have done in the last couple of World Cups. They have caused shocks by playing positive, entertaining cricket,” said Andy Moles, who replaced former Pakistan paceman Kabir Khan as Afghanistan coach in September last year.

It was Kabir who lifted the nascent cricket nation from division five in 2008 to narrowly missing out on a berth in the ICC World Cup 2011. Another former Pakistani international, Rashid Latif, then helped Afghanistan reach the the 2010 World Twenty20 and take the silver medal at the 2010 Asian Games in China.

Latif believes Afghanistan should not worry about results in the World Cup in Australia and New Zealand where they will face both co-hosts as well as Sri Lanka, England, Bangladesh and Scotland in the group stages. “I have faith in them. The way they are investing money, the Afghanistan team will beat top teams in the next five years,” said Latif. But he also cautioned: “I don’t want them to go down like Kenya.”

The African nation reached the semi-finals of the 2003 World Cup but their fall from grace led them to losing their one-day international credentials. “For me they should gain more and more experience and with that learn to play better after the World Cup. “I want them to play in a manner that if the kids are watching on television back home they will feel proud of them.”

With two channels pledging live coverage, Afghanistan will begin their maiden World Cup campaign against Bangladesh in Canberra on February 18. Afghanistan will take heart from their shock win over Bangladesh in the Asia Cup in Dhaka last year. It was their first win in 10 one-day internationals against a Test-playing nation. But like most of the Asian and Associates teams, batting on bouncy Australian pitches and coping with swing in New Zealand will be the main challenge.

Afghanistan’s batsmen know one way of batting — to attack. “The biggest challenge is going to be how the batsmen handle the quicker bowlers. Playing in Australia is going to be quite brutal for some of these guys who aren’t used to those conditions,” said Moles.

“I will work hard to get them as much confidence as possible, to play without fear of failure and, if they see an opportunity at any stage in a game, to take it. I’d like them to enjoy the challenge that lies ahead of them.”

With experienced players like Nowroz Mangal, Mohammad Nabi, Samiullah Shinwari, Najibullah Zadran, Shapoor Zadran and Hamid Hasan, Afghanistan will hope they can show their talent in the big league. 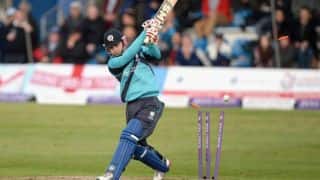