In their maiden Test assignment, against Pakistan last year, Ireland recovered from a poor first innings batting display to leave quite an impression.

In their maiden Test assignment, against Pakistan last year, Ireland recovered from a poor first innings batting display to leave quite an impression.

Not only that, Ireland blew away Pakistan top-order giving them a massive scare before the tourists repaired the damage to record a five-wicket win.

A similar scenario played out in Ireland’s second Test assignment, currently underway against Afghanistan in Dehradun. They succumbed to spinners and were reduced to 85/9 before Tim Murtagh (54*) and George Dockrell (39) combined to lift them to 172- all out.

Murtagh said Ireland will be taking inspiration from their Test debut as they aim to give Afghanistan a better competition in the second innings. “We have got to dig deep and sort of relive that spirit in Malahide where we came back well in the second innings and scored a good score there. When it is our turn to bat again, I think it is obviously going to be tricky but we are going to have to dig deep and show that same spirit,” Murtagh said.

Murtagh hit four fours and two sixes during his innings as he became the first No. 11 since 2014 to hit a Test fifty on Day 1 of the one-off Test.

“I wanted to get the team to three figures first. That was my first goal. And then it was nice to contribute with the bat. The day started very well with 37-0 then after not many overs we lost our way. I had to do bit of repair job which we did to some extent,” he said.

Murtagh admitted Ireland handed back the advantage after opting to bat first. “We would have been hoping to get 250-plus on that pitch. Knowing that it has had a lot of cricket during the course of the T20s and ODI series, knowing that we weren’t going to bat last, it was definitely an advantage. We have given that back to them a little bit there,” he said. 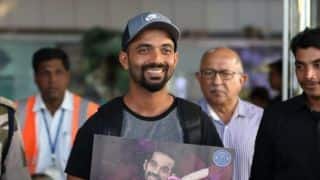