Ireland may bring in Boyd Rankin or Barry McCarthy to bolster their bowling. Afghanistan, on the other hand, will like to maintain winning momentum with the same XI.

“We love our cricket team. They can go and play anywhere and we will always support them. We’ll win this game”, stated an Afghanistan cricket fan on the eve of the first T20I against Ireland at Greater Noida Sports Complex, Noida. BCCI, Afghanistan Cricket Board (ACB) and Greater Noida Industrial Development Authority signed a MoU in December 2015, as Afghanistan adopted a new ground in the National Capital Region of India (Noida). The game saw decent footfalls, largely backing Afghanistan. The atmosphere was electric, and Afghanistan did not disappoint, winning by 6 wickets to take a 1-0 lead in the three-match series. Full Cricket Scorecard, Afghanistan vs Ireland, 2nd T20 at Greater Noida

The second match will again be held at the same venue on March 10. It is a small ground with lightening fast outfield. Though it does not enjoy the basic facilities of a renowned stadium, being deprived of a roof and screen to adjudge umpire’s decision, expect a stiff contest amidst another good turnaround. Spectators will refer to their smartphones for updates and dance to the bat swing of Shahzads and O’Briens in another promising tie. From both teams’ perspective, Ireland will like to come back hard in a do-or-die clash, whereas Afghanistan will look to seal the series then and there.

Afghanistan started off with a bang. Opting to bat, Ireland lost Paul Stirling early. Nonetheless, Afghanistan could not apply the brakes on the scoring as Stuart Thompson and William Porterfield looked under control in the middle. Asghar Stanikzai, by all means, could have rotated his spinners a little better. However, by saving Rashid Khan for the latter overs, he managed to curb Ireland’s run-rate.

Stanikzai will fall back upon his spin trio of Rashid, Amir Hamza and Mohammad Nabi. The latter had a forgettable outing with the ball, but will be expected to come good in the second T20. Ireland will hope for the same from their mainstay Stirling and big hitter Kevin O’Brien to use the long handle to good effect.

Afghanistan were at par with the bat. Ireland bowlers were hammered due to wayward line and lengths and not bowling according to the field and dimensions of the ground. Ireland need to raise their game with the ball, with the likes of some big hitters in the opposition camp. Apart from Thompson, every bowler Craig Young, George Dockrell and O’Brien conceded above 8 per over. Jacob Mulder posed some threat with his googlies but remained inconsistent. As a result, Irish bowlers will have to start from scratch.

Another total in excess of 150-160 should be on cards. Ireland added only 29 runs between 10-15 overs and were haywire with the ball. If they rectify their flaws, they may manage to spring a surprise on Friday evening. Having lost their last three games to Afghanistan in the format, they need to revamp soon.

T20 is a game of momentum. It maybe tilted towards Stanikzai’s side but can favour Porterfield’s camp in no time.

Ireland may bring in Boyd Rankin or Barry McCarthy to bolster their bowling. Afghanistan, on the other hand, will like to maintain winning momentum with the same XI. 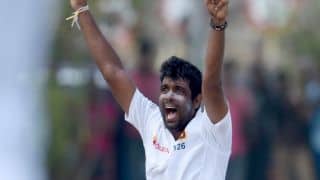