Afghanistan open their World Cup campaign against Australia in Bristol on June 1.

Spin sensation Rashid Khan and allrounder Mohammad Nabi will spearhead Afghanistan‘s assault on the World Cup after a 15-man squad was announced on Monday.

Seaming allrounder Gulbadin Naib will captain the side when they head to England and Wales for the global showpiece which begins on May 30, the Afghanistan Cricket Board said.

Joining the spin attack of Khan and Nabi – who led Afghanistan in their first World Cup four years ago – will be 18-year-old mystery spinner Mujeeb Ur Rahman.

Fast bowler Hamid Hassan returns for the first time since 2017 because of fitness issues alongside other frontline quicks Dawlat Zadran and Aftab Alam.

Naib had earlier this month been announced as captain, replacing Asghar Afghan who has still been included in the squad.

Dawlat Khan Ahmadzai, head of the ACB’s selection committee, said they had tried to select “a successful, experienced and balanced team”.

While most of the Afghan team are at a training camp in South Africa, the spinners are all warming up for the 50-over World Cup in the Indian Premier League.

Many Afghanistan cricketers learned the game in refugee camps in Pakistan, their families having fled the Soviet invasion in the 1980s. Since beating the odds to compete at the 2010 World Twenty20 in England, Afghanistan have qualified for all major international tournaments and recorded their first Test victory against Ireland last month.

Afghanistan open their World Cup campaign against Australia in Bristol on June 1 and are regarded as dark horses, having beaten former champions Sri Lanka in the Asia Cup last year as well as forcing a tie with giants India. 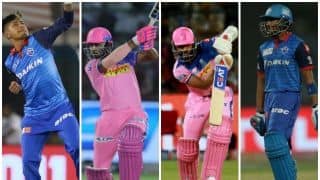