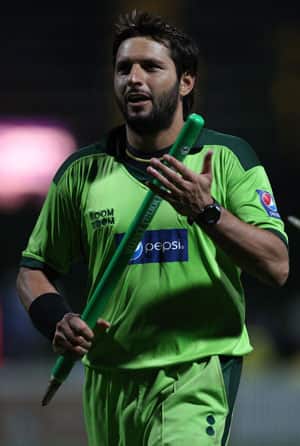 “There is a possibility that Pakistan and India play the final of the World Cup and if that happens it would be ideal for the World Cup, one-day format and for the game of cricket,” Afridi told AFP.

The arch-rivals are in separate groups at the 14-team World Cup, hosted by Bangladesh, India and Sri Lanka starting on February 19.

The top four teams from each group meet in the quarter-final and Afridi said he hoped India and Pakistan would avoid each other until the April 2 final.

“Both India and Pakistan have to play above their potential to reach the final but it would be ideal for billions of people around the world,” said Afridi, who will be playing his fourth World Cup.

Pakistan have yet to beat India in four World Cup clashes. India beat Pakistan by 39 runs in a highly charged quarter-final at Bangalore in the 1996 Cup.

The two have not played each other outside tournaments since Islamist gunmen went on the rampage in Mumbai in 2008, killing 166 people and severing peace talks after New Delhi blamed the attack on Pakistani-based militants.

The pair met in the Champions Trophy in South Africa in 2009, however, where Pakistan beat India — the last international match between them.

Afridi said beating their arch-rivals in the Mumbai final would be the “icing on the cake.”

“We would love to beat India in India and in a World Cup match because we have never done this before and this could be a great motivation,” said Afridi.

Playing down any possible security threat during the World Cup, Afridi said: “People of both the nations love cricket and I don’t see any threat.

“But yes, if the atmosphere is highly charged it would definitely spur both the teams on and bring out the best in the players from both the sides.”

Cricket has the power to unite both nations, he said. “I know that this beautiful game has the charm and the power to bring the nations closer,” he said.

“What we have seen in the past is an ample proof of that. When India came here in 2004, people from both sides came closer and when we toured India we were welcomed by their people, so it’s a mutual love for the game.”

“I think it’s an open tournament with no one favourite team,” said Afridi. “I think India is one of the top favourites. South Africa has been playing well and Australia can still win,” said the Pakistan captain.

“The main thing is to give it your best and the best results will come.” Pakistan fly out to Dhaka early Friday to play warm-up matches against England and Bangladesh.

Pakistan open their World Cup campaign against Kenya at Sri Lankan town of Hambantota on February 23.