MCC World Cricket Committee also said that the Test cricket remains the pinnacle of the sport.

The WCC is pleased to see that Women s T20 Cricket is likely to be included at the Birmingham 2022 Commonwealth Games, having supported this in their last meeting in March. Cricket s inclusion was approved by the Commonwealth Games Federation executive in June and the result of the vote by the 71 member associations is expected imminently, said MCC World Cricket Committee in a media release after the conclusion of a two-day meeting at Lord’s.

This is a hugely exciting opportunity to grow the women s game and with matches taking place at Edgbaston a venue with a strong cricketing fan base the WCC expects there to be big crowds for the fixtures, MCC continued.

Cricket is also due to return to the Asian Games at Hangzhou 2022, likely again to be in T20 format. The WCC is excited to see cricket being introduced to, and gaining popularity in, new destinations. Including cricket at Hangzhou 2022 is the perfect opportunity to showcase the sport to the market in China. There is still much to be done if cricket is to be included in the Olympics, with Los Angeles 2028 the earliest likely opportunity and the ICC continuing to work internally to align cricket to pursue the sport’s Olympic ambitions, added MCC.

ICC Chief Executive Manu Sawhney, who presented to the World Cricket committee said: We are committed to ensuring all formats of the game are healthy and vibrant for the long term and that includes Test cricket.

The committee, chaired by Mike Gatting, has the likes of John Stephenson (MCC Head of Cricket), Shakib Al Hasan

“With the start of the ICC World Test Championship, the WCC is pleased to see it come to fruition as the committee has been supportive of the idea for many years. Over the course of this month, six teams will play their first fixtures and the league table will be starting to take shape. As the tournament develops, the WCC felt it was important that it is marketed well and audiences are educated around the new system and are excited about the way the ICC World Test Championship works, which gives context to the fixtures that take place around the world and throughout the year,” said MCC.

We are committed to ensuring all formats of the game are healthy and vibrant for the long term and that includes Test cricket,” said ICC Chief Executive Manu Sawhney, who presented to the World Cricket committee. 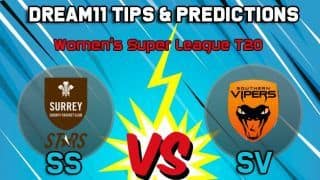