The Hyderabad Cricket Association has welcomed Rayudu's decision to play for them.

Less than a week after he took a u-turn on his earlier decision to “retire from all forms and levels of the game” and said that he was ready to play in the Indian Premier League, former India batsman Ambati Rayudu has announced his intention of playing for Hyderabad in domestic cricket.

According to the Hindu, Rayudu sent an email to the Hyderabad Cricket Association (HCA) in which he termed his decision to retire in July as an “emotional one” and that he was “willing to play in all formats of the game” once more.

“I want to take this opportunity to thank Chennai Super Kings, VVS Laxman and Noel David, who have been very supportive during the tough time and are instrumental in making me realise that I have enough cricket left in me,” Rayudu wrote in his email to Prof Ratnakar Shetty, who is part of the Committee of Administrators appointed to run the affairs of the HCA. “I am looking forward to a wonderful season ahead with a very talented Hyderabad team and help the team realise its full potential. I will be available from September 10 to join the Hyderabad team.”

In response, the HCA’s chief selector Noel David welcomed Rayudu’s decision and felt that the 33-year-old has “has at least five years of cricket” left in him.

“It is great news for us. I still believe he still has five years of cricket and groom youngsters which is more important for us. Last year without him, we struggled in Ranji Trophy,” David said. “Rayudu’s class and experience will prove to be very handy for Hyderabad and will surely have a major positive influence on the other players as he will be playing in all the formats.

“Hopefully he carries on the good work and leads from the front and I am confident of Rayudu getting support from all quarters.”

Rayudu, frustrated after he was dropped from India’s ODI squad and not picked for the 2019 ICC Cricket World Cup, announced his retirement in July. He had earlier tweeted a thinly-veiled message to the chief of selectors MSK Prasad after his place went to the allrounder Vijay Shankar.

Rayudu made his ODI debut in July 2013 against Zimbabwe in Harare and in 55 appearances, scored 1694 runs with three centuries and 10 half-centuries. He also played in 6 T20Is, scoring 42 runs.

For Hyderabad, Rayudu has scored 2207 runs in first-class cricket, with seven centuries, and 1039 in List A cricket. 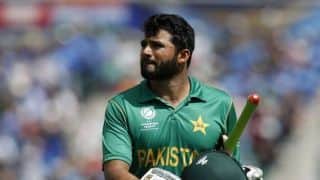