Following repeated snubs for the ongoing ICC World Cup 2019, Ambati Rayudu has reportedly announced retirement from all forms of cricket.

Following repeated snubs for the ongoing ICC World Cup 2019, Ambati Rayudu has announced his retirement from all forms of cricket. Rayudu was excluded from India‘s 15-man squad for the world cup in England with Vijay Shankar being preferred due to his all-round skills.

As per a report in PTI, Rayudu is yet to make a formal announcement but he has communicated his decision to the BCCI. “We received his mail in the morning. He did not specify why he is retiring. It was a pretty straightforward e-mail in which he thanked all the captains he played (under) and also the BCCI,” an official was quoted as saying by the news agency.

The middle-order batsman was then kept in reserves in case of injury. However, following inuries to opener Shikhar Dhawan and Shankar, the Indian team management called-up Rishabh Pant and Mayank Agarwal as the replacements.

However, Rayudu hasn’t disclosed the actual reason of his sudden decision to call time on his cricketing career.

Rayudu made his ODI debut in July 2013 against Zimbabwe in Harare and in 55 appearances, scored 1694 runs with three centuries and 10 half-centuries. He also played in 6 T20Is, scoring 42 runs.

Rayudu was talked up as the solution to India’s search for a reliable batsman at the No. 4 spot for the past one year. However, a dip in form resulted in him being overlooked for the final squad for the world cup.

Chairman of selectors MSK Prasad had reasoned that Shankar was preferred due to his three-dimensional skills.

He was also part of the Indian Cricket League in 2007 that hindered international ambitions. He was later pardoned by the BCCI for his association with the rebel league that paved the way for his debut in 2013. He has also been an integral part of Mumbai Indians and Chennai Super Kings in the cash-rich Indian Premier League. 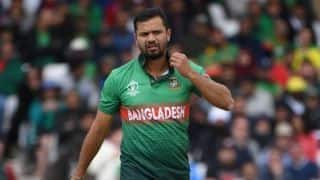 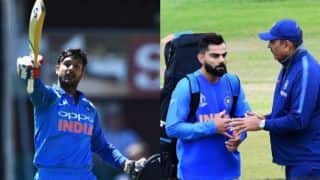