Captain for the T20I series is yet to be decided.

Cricket South Africa (CSA) named Aiden Markram as stand-in captain for the remainder of the ODI series between India and South Africa. Faf du Plessis, who scored a stunning hundred in the series opener, was ruled out of ODI as well as T20I series due to fractured finger. However, captain for the T20I series is yet to be decided.

“We’re aware Markram is new to the setup but he’s always been part of our plans since his U-19 (captaincy). We want to have a pool of leaders,” Cricket South Africa announced.

Markram, who has played a mere two ODIs for South Africa, said, “As a little boy you dream of captaining your country one day. (It’s a) super humbling experience. What happened to Faf in Durban was a freak incident. I officially heard (about me becoming captain) first thing this morning. It’s something you can’t take for granted. I enjoy captaining and it’s gonna be an additional pressure to deal with. Hopefully it’s a good pressure. I’ll keep sending messages to Faf on and off the field asking for advice. I’ll definitely consult senior players for the best interest of the side.”

India lead the six-ODI series 1-0. The second ODI will be played on Sunday at Centurion. 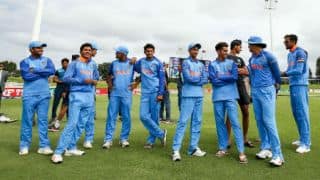