Mumbai: Mitchell Johnson have called time on his international career and Mitchell Starc is injured, but India’s star batsman Ajinkya Rahane today said it is always a challenge to play against Australia. If Johnson called time on his international career late last year, Starc suffered a stress fracture on his ankle during the Day-Night Adelaide Test against New Zealand. Rahane, though, still believed that Australia have wicket-takers like James Pattinson to trouble the Indian batsmen in their upcoming tour. “It’s a challenge always to play against Australia. Yes, they will miss Mitchell Johnson and Mitchell Starc, but they have got other bowlers like (James) Pattinson. We are going to focus first on One Day Internationals (ODIs) and then think about T20 series. By then we would have got used to the conditions. I am confident we will do well on tour,” Rahane said in a media interaction here. READ: MS Dhoni, Ajinkya Rahane pay tribute to Pranav Dhanawade’s world record

“They (Johsnson and Starc) have been top performers for Australia. Australia will definitely miss them. But they have Pattinson and other good bowlers. As a batting unit we have to play on the merit of the ball,” he added.

India will play Australia in five ODIs and three T20Is starting January 12 and Rahane is focused on his game. “I always try to improve my game (when asked about rotating the strike in ODIs). I am confident about myself. I am a team man and would be happy to do whatever team management wants me to do,” he said.

Rahane is in red hot form after the Mumbai batsman struck two centuries in the final Test against South AFrica in Delhi and he is ready to face the bouncy Australian pitches. READ: MS Dhoni: Focus is on Australia tour, not retirement

“Two Test hundreds against South Africa in last Test were very special as they were made at the place where I made my debut and we won the series too. For this tour have made normal preparations to face bouncy conditions in Australia. We will play in challenging conditions but we want to return with a win,” said the confident batsman.

Meanwhile, Indian pacer Umesh Yadav stressed on “confidence” and “attitude” when taking on the Australians. “It’s all about your attitude and confidence. They need to be high to play well against Australia. I am here because of my pace. I am trying to get more pace. I try to swing with a good wrist position. But I also focus on line and length while aiming at the off stump,” Umesh said. 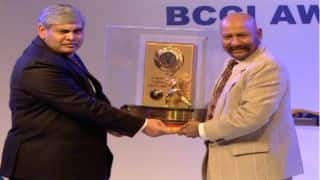