Ajinkya Rahane: Playing ICC World T20 2016 at home will be a big challenge

Ajinkya Rahane: Playing ICC World T20 2016 at home will be a big challenge

“I enjoyed playing in all formats of the game but T20 is a special to me". said Ajinkya Rahane.

Mumbai:India star batsman Ajinkya Rahane believes it will be a big challenge for the country to play the ICC World Twenty20 in 2016 at home. India will launch their World T20 2016 campaign in Nagpur against New Zealand on March 15, while it will go head to head with arch-rivals Pakistan in Dharamsala on March 19. Their other matches will be against the Group A (Bangladesh, Netherlands, Ireland and Oman) winner in Bengaluru on March 23 and Australia in Mohali on March 27. India, who clinched the World T20 title in the inaugural edition in 2007 in South Africa under the leadership of MS Dhoni, also have the experience of delivering on the big matches with the win in the 50-over World Cup in 2011. But Rahane said the pressure will be there and the players will have to get used to it. READ:ICC World T20 2016: ICC requires two more dressing rooms at Eden Gardens for final

“I enjoyed playing in all formats of the game but T20 is a special to me. And I like to really improve on that. We have to enjoy and give our best and hope all falls in place on the very day. T20 cricket comes naturally to me,” Rahane said at a function here where the schedule for the International Cricket Council (ICC) World Twenty20 2016 was announced on Friday. “I am looking forward to the World T20 and I think it is a big challenge for us as a home team to do well in front of home crowd,” he said. When asked about which teams he would like to pick as favourites for the tournament, the 27-year-old played safe, mentioning that the event will be an open contest and the team playing better cricket on a particular day will win. READ: ICC Test Rankings: Ajinkya Rahane, Ravichandran Ashwin become India’s highest ranked batsman and bowler respectively; placed at 12th, 2nd spot

“Every team is equally dangerous on a given day and I hope we do give our best and hope to come out victorious,” he said. The Mumbai batsman was also praised by India Test skipper Virat Kohli, as someone who times the ball well and has a great power in his stroke play. “The power and timing Rahane has, I think it is something unique. In IPL he has shown it over and over again why he is so special batsman. It requires really hard work to be a batsman like him,” Kohli said here while praising Rahane.

Video: Yuvraj Singh on a mission; Six-Packs his next destination 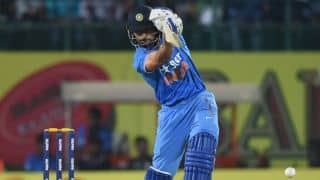 Virat Kohli: IPL has taken home advantage away from India