All eyes are on the upcoming "Day-Night" Test between India and Bangladesh which will mark a memorable occasion in the rich history of Indian cricket.

Excited about the first-ever Day-Night Test in the country, Team India’s deputy Ajinkya Rahane couldn’t hide his emotions when he posted a picture of himself along with the “Pink Ball” on Monday. Sensing the opportunity to take a jibe at their teammate, skipper Virat Kohli and opening batsman Shikhar Dhawan wasted no time in pulling Rahane’s leg over the latest picture.

If Kohli appreciated Rahane’s click with a quirky comment: “Nice pose jinksy,” it was Dhawan who later joined the fun and replied: “Sapney mein pic khich gayi ( picture was clicked in dream).”

However, the banter didn’t stopped here as Rahane later came up with even funnier replies to counter their teammates in a funny manner. On Kohli’s comment, he replied, “Thanks Cheeku (with a wink emoticon)”. While for Dhawan, the Mumbai batsman saved his best for the last as he replied: “Sapno ne nahi… apno ne pick khichi hai (along with wink emoji).

The second Test between India and Bangladesh will mark a historic occasion for cricket fans in the country when they get to witness their favourite players in action under the lights. The match will be played at the iconic venue of Eden Garden, Kolkata.

Overjoyed with the thought of becoming a part of the history – Rahane had earlier announced that he is “already” dreaming about the Pink-Ball Test, starting on November 22. “Already dreaming about the historic pink ball test,” Rahane said in a Twitter post along with a picture of him sleeping and a Pink Ball lying next to him.

India thrashed Bangladesh by an inning and 130 runs in the first Test and will look to whitewash it here as they start their Pink-Ball Test campaign.

The Kohli-led side are already on the top of the ICC World Test Championship chart with 300 points from six matches, recording wins in all six of them. 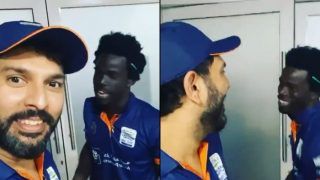