Alastair Cook has it in him to surpass Sachin Tendulkar as Leading run-scorer in Tests, says Trevor Bayliss

Alastair Cook has it in him to surpass Sachin Tendulkar as Leading run-scorer in Tests, says Trevor Baylis

Chester-Le-Street: England coach Trevor Bayliss believes Alastair Cook has it in him to surpass India great Sachin Tendulkar as Test cricket’s all-time leading run-scorer. Cook became just the 12th player in history to score 10,000 Test runs during the course of his unbeaten 47 as England beat Sri Lanka by nine wickets in the second Test at the Riverside in Chester-le-Street on Monday. The England captain was also the first Englishman to achieve the feat and, at 31 years and 157 days, the youngest to get to the landmark, breaking Tendulkar’s record by more than five months. Cook is unlikely ever to play white ball international cricket again having been dropped from the one-day side prior to last year’s 50-over World Cup. READ: Alastair Cook can challenge Sachin Tendulkar’s all-time Test record, feels Sunil Gavaskar

But even without that burden, Tendulkar’s aggregate tally of 15,921 Test runs is still some way off for left-handed opener Cook, who now has 10,042 to his credit. However, given Cook has scored at a rate of around 1,000 runs a year for the past decade, only a career-ending injury or a sharp decline in form could deny him the chance to surpass Tendulkar’s haul. “It will be about how long he wants to keep doing it But certainly there is time on his side, so there is no reason he couldn’t if his heart is still in it and his will to do it is still there,” said Bayliss.

Former Sri Lanka coach Bayliss is no doubt of Cook’s quality. “He is right up there with any of best international players. He has these powers of concentration. He is not the biggest stroke-player of all time — [but] he knows his game very well, he is very patient and he sticks to it. To be able to do that over period of time he has played and score as many runs as he has is a fantastic effort.” READ: Alastair Cook breaks Sachin Tendulkar’s record: Twitter Reaction

Victory at the Riverside, the headquarters of north-east county Durham, saw England take an unassailable 2-0 lead in their three-Test series with Sri Lanka. England quickly announced an unchanged 12-man squad for next week’s third Test at Lord’s. That means they still have the option of giving a debut to Nottinghamshire seamer Jake Ball. READ: Alastair Cook 1st England batsman and youngest-ever to score 10,000 runs in Test cricket

Fast bowler Steven Finn, who plays at Lord’s for Middlesex, could be vulnerable if England want to assess Ball in international match conditions ahead of their upcoming home Test series against Pakistan. But Bayliss indicated Finn and struggling number three batsman Nick Compton, another Middlesex man, would get a fair run to prove their worth. “There have been discussions over the last month or so, but we have been about giving guys the opportunity to show us what they have got. The team has been a winning one, so there is no reason to change it just at the moment.” Pakistan cricketers to practice with Duke ball before England tour 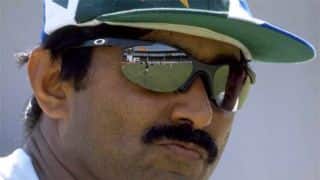