Alastair Cook said a tour match performance should not be compared with Test cricket.

England captain Alastair Cook said the Indian bowlers’ performance against Leicestershire says nothing about the actual quality of the attack. India’s bowlers had two miserable tour games against Leicestershire and Derbyshire. India play England in the first Test of a five-match series in Nottingham starting from July 9, 2014.

The England captain was not prepared to take the Indian bowling lightly. Cook in his pre-match press conference said: “The Leicester game was a warm up match. International cricket is a completely different ballgame.”

While India was a young side, Cook was not prepared to underestimate them. “There are two ways one can look at it. Either we can say they are an inexperienced side, or a side that has not been scarred by 2011. They are a very good side,” he added.

Cook was also not prepared to make much of England’s loss against Sri Lanka in the recent Test series. “We played pretty well all through, it was only two bad bowling sessions that lost us the series,” affirmed Cook.

When enquired about the pressure he was facing at the current moment, Cook responded that it was a part of the game and one has to develop a thick skin while captaining his country. At the same time, he was looking forward to the series.

“It is quite rare to play a five-Test series,” the England captain said.

Runs may not have graced his bat in the recent times, but Cook was in excellent humour. He skilfully evaded the Shane Warne-tinged bouncers hurled at him while responding with élan at the age-old question about the effects of captaincy on batting.

“When facing someone at 90 miles per hour, I have never thought about my field placings. So, no, I have never had many problems in dissociating batting and captaincy.” India tour of England 2014: Possible strategies England may use against Indian batsmen 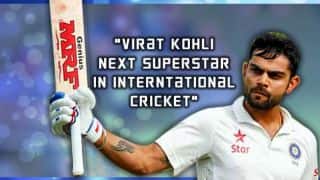