They said Alastair Cook should retire. They said Stuart Broad should be dropped. They said England were physically, mentally, and spiritually down. What they did not say that the warhorses have been there and that they know how to rise above it.

Broad narrows his way down to resurgence

Australia made Broad dance to chin music. He shuffled, moved across, ducked, and whatnot to avoid the bouncers. He survived, and Australia lost the vigour to bend their backs. In came Nathan Lyon, and Broad used the same dancing shoes to shimmy down the track and send the ball soaring over the fence. We almost lost the sight of the ball in the backdrop of the colossal MCG. Before Australia knew, Broad narrowed down his way to his 12th Test fifty.

Cook dishes out his best flavour

Sandwiched between the magnificent 243 against West Indies and today’s 244* are 10 innings that comprised a highest score of 37 the driest spell of Cook’s career. But even then, how could we question Cook’s appetite for runs? And for those who did, Cook quenched his thirst by scoring his fifth double-hundred. He is on 244 off 409 balls, and if he carries his bat, it will be the highest score by a batsman to carry the bat. Again, why are we surprised? This is Cook we are talking about. We realise his achievements only when he raises his bat. We are too busy ignoring him while he is collecting runs. Extravagance is too bitter for Cook’s taste.

What underlining about Cook and Broad’s partnership is that they took a mere 111 balls to stitch 100 runs together. Australia had no answer to the counterattack.

Australia, however, would have batted by now had Steven Smith not squandered for a second time. He had dropped Cook at first slip yesterday, and he dropped him at square leg today. Cook did not let Australia off the hook otherwise. And you should have seen the straight-drive that Cook painted to reach the double-hundred. Broad celebrated before Cook removed his helmet to acknowledge crowd’s standing ovation.

No wicket in Bird’s nest

Jackson Bird, who replaced the injured Mitchell Starc, went wicketless. Not that he bowled badly but the wicket is unfavourable for any pacer. Lyon ended with three: one of these was Moeen Ali, who became his victim for the sixth time in the series. On a scorching day and on a track where Cook grinded them into the MCG dust, we must credit Josh Hazlewood and Pat Cummins’ efforts to take three-wicket hauls each. 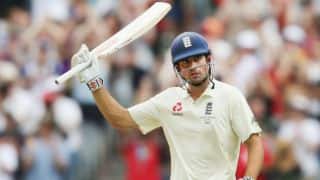 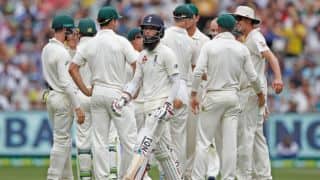