Alastair Cook to retire after fifth Test against India

Alastair Cook to retire after fifth Test against India

England’s all-time leading run-getter Alastair Cook has announced he’s retiring from Test cricket. The fifth and final Test against India at Kennington Oval will be his last in England shirt.

The 33-year-old made the stunning announcement in a statement released by the England and Wales Cricket Board [ECB] on Monday.

“After much thought and deliberation over the last few months I have decided to announce my retirement from international cricket at the end of this Test series against India, he said in the statement.

Cook will retire as the sixth highest leading run-getter in Tests with 12254 runs, 32 centuries so far. However, he will continue to represent his county Essex next season. The Test at The Oval will be is 161st – the most for an England cricketer.

The speculation over Cook’s retirement gathered pace after his below-par performances in the ongoing five-Test series against India which England clinched on Sunday in Southampton. In seven innings, Cook managed 109 runs. Prior to the start of the fourth Test at Southampton, Cook was averaging a poor 19 in 2018 with just one half-century in 14 innings.

Our greatest ever run scorer! Send us your message to Cookie.#ThankYouChef pic.twitter.com/crAegqjigR

His last notable performance came in the boxing day Test against Australia in the Ashes when he scored a magnificent double hundred at Melbourne in 2017. It helped England draw their only game of the series which they lost 0-4. But barring that, there hasn’t been anything remotely noteworthy.

“Although it is a sad day, I can do so with a big smile on my face knowing I have given everything and there is nothing left in the tank. I have achieved more than I could have ever imagined and feel very privileged to have played for such a long time alongside some of the greats of the English game. The thought of not sharing the dressing room, again, with some of my teammates was the hardest part of my decision, but I know the timing is right,” he further added.

Cook made his Test debut against India, hitting a century in Nagpur in the second innings. He went on to surpass Graham Gooch as the leading run-scorer for England in Test cricket in 2015.

“I have loved cricket my whole life from playing in the garden as a child and will never underestimate how special it is to pull on an England shirt. So I know it is the right time to give the next generation of young cricketers their turn to entertain us and feel the immense pride that comes with representing your country.”

Cook, after playing his first two Tests, missed out a third outing due to an upset stomach. However, since then, he hasn’t missed a single match and has represented England in 158 consecutive Tests, a world record. He also captained England to two Ashes series win. It was during his captaincy that Kevin Pietersen was sacked after England were humiliated 0-5 by Australia in Ashes in 2013-14. In February 2017, after suffering a 0-4 defeat in India, he stepped down as England captain, paving the way for Joe Root to take over the reins. He resigned as the longest-serving England captain, having led them in 59 Tests.

My family and I have had 12 wonderful years fulfilling my dreams and this could not have been done without them. So I wish to thank my parents and brothers, my wife, Alice, and her family for their quiet, unwavering support behind the scenes. As cricketers, who travel frequently, we often don t realise just how important our families are to our success.

I would also like to thank Essex County Cricket Club for their help and support ever since I was 12, and I can t wait to get fully involved with them in the 2019 season. I wish the England team every success in the future, and I will be watching with great excitement. 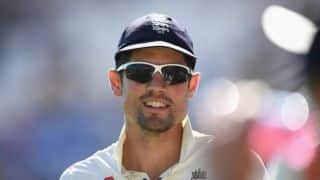