South African all-rounder Albie Morkel feels that it will hard for him to emulate Lance Klusener's on-field achievements but if he can turn out to be half as good as the former all-rounder, he would be a happy man. 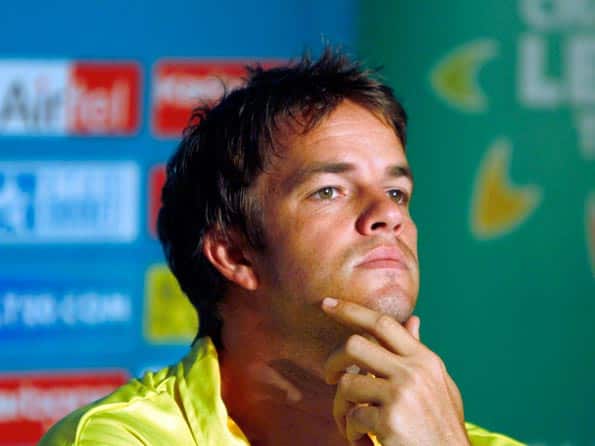 Lance Klusener is one of my idols, says Albie Morkel. Getty Images

South African all-rounder Albie Morkel feels that it will hard for him to emulate Lance Klusener’s on-field achievements but if he can turn out to be half as good as the former all-rounder, he would be a happy man.

“Lance Klusener is one of my idols. If I can be half the player he was, I will be happy,” said Morkel, who scored 19 from six balls with three huge sixes and then grabbed three wickets said at the post-match presentation ceremony.

The big bodied Protea admitted that it is a very difficult job to just get out there in the middle and start hitting from the outset.

“It is not easy to hit in the end overs. Specally if you get only 6-7 balls per match. I had to practice hard,” Morkel, whose one of the three sixes cleared a distance of 114 metres said.

About providing his team with important breakthroughs, the player stressed on the need to have variations. “I am not a 145 kmph bowler. So I need to use a lot of variations. When there is a bit of swing around, it does help a bit but when the ball goes straight, it becomes a bit tough.”

Chennai skipper Mahendra Singh Dhoni admitted that they bowled ordinary stuff in te first few overs which gave Sunny Sohal a chance to get off to a blazing start.

“Our bowling was ordinary to start off. It is not easy when someone is willing to give away his wicket and score runs. But we came back well. I am happy with the runs we put on the board. We always try to set up a platform because of which we are able to score lots of runs in the final 3-4 overs,” the skipper said about scoring 69 from the last five overs. He was all praise for Morkel.

“Albie really finished the game well today. Lots of teams put emphasis in the last six, we look to capitalise on the last 4-5 overs. Even if me and Anirudha are not able to do it, Badri manages to do it in the end and ends up with a healthy strike rate.”

The skipper doesn’t want to think about the play-offs as of now. “There is still a long way to go. This was a game when we went in feeling a bit relaxed. We have to learn from our mistakes and hope that we don’t repeat them in future.”

Deccan Chargers captain Kumar Sangakkara conceded that they lost the momentum once Sohal was gone. “Sunny and Shikhar batted really well but we lost momentum in the middle. Chennai did the basics better than us. They got 15-20 runs more than we were looking at. We’ve got another six games and it only takes a little bit to turn it around in T20,” he concluded.

Shastri backs both Warne and Tendulkar over Jaipur pitch